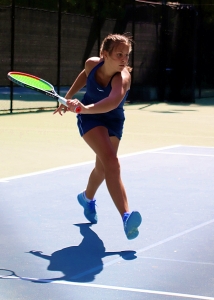 Dunwoody’s Sophia Chiverton rallied from a set down to win her No. 1 singles match against Denmark’s Masha Karch to propel her team into the Class 7A Sweet 16 round of the state tennis playoffs. (Photo by Mark Brock)

Four DeKalb teams are now in the State Tennis Tournament Sweet 16 as both Chamblee teams and the Dunwoody girls picked up victories on Monday to punch their ticket to the second round.

The Dunwoody Lady Wildcats (13-6) needed a third set, come-from-behind win by No. 1 singles player Sophia Chiverton to win a 3-2 thriller over Denmark at the Vermack Swim and Tennis Center.

The two teams had split in the other lines while Chiverton rallied against Masha Karch after dropping the opening set 2-6. Chiverton evened the match at one set apiece with a 6-2 victory in the second set to force the third and deciding set.

Chiverton jumped out to a 4-1 lead in the third set only to have Karch rally with three consecutive game wins including a break of Chiverton to close the set within 4-3. Karch saved a game-point at ad-out in the eighth game to knot the match at 4-4.

Chiverton won her serve to move within one game of clinching the match for herself and the team. A shot went long for Karch to put Chiverton up at match point.

The match point was clinched as Chiverton sent a backhand winner down the right line to seal the match with a 6-4 victory and propelling the Lady Wildcats into the Class 7A Sweet 16. Dunwoody will face the Peachtree Ridge/Alpharetta winner in the second round.

The Wildcats (11-3) were not as fortunate as Denmark won the final two matches on the court to take a 3-2 win to end Dunwoody’s season. 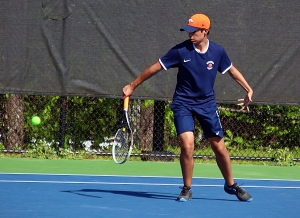 Dunwoody’s Mark Romano won a 6-2, 7-6 battle at No. 2 singles over Denmark’s Noah Cohen for a 2-1 Dunwoody lead before the Wildcats fell 3-2 in the first round of the Class 7A state playoffs. (Photo by Mark Brock)

Denmark’s Connor Hazard held off the comeback attempt by Dunwoody’s Quinn Wicklund by winning a 7-5 tiebreaker in a 7-6 second set win after taking the first set of the match. It evened the match at 2-2.

Pratham Shah rolled to a two-set win over Dunwoody’s Anthony Nelson to clinch the victory for Denmark.

Chamblee advanced both the Lady Bulldogs (15-3) and Bulldogs (13-4) to the Class 5A Sweet 16 with convincing victories over their respective opponents.

The Bulldogs opened the state playoffs with a 4-1 win over Jackson County. Senior Andrew Pietkiewiez won No. 1 singles and Bryce Starks won No. 3 singles. Chamblee also won the No. 1 and No. 2 doubles.

In Class 6A first round girls’ action, the Tucker Lady Tigers fell 3-0 on the road to Valdosta to close out their season.

The Tucker Tigers travel to Houston County on Tuesday for a 4:00 pm match in the first round of the Class 6A boys state playoffs.