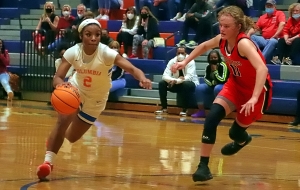 The Columbia Lady Eagles and Eagles both survived tough battles to advance to the Class 2A State High School Basketball Quarterfinals next Wednesday.

The Lady Eagles overcame the emotional loss of teammate Keyonna Giles who was injured in the third quarter with Columbia holding a 24-17 advantage over No. 4 ranked Rabun County. Columbia had already lost Kamiya Kennedy before their first round game to an injury during practice.

Rabun’s Lady Wildcats took advantage of the depleted Columbia squad to put together a 10-0 run fueled by a three-point play by Carley Haban. Carlie Deetz followed with a three-pointer to go with a layup by Lucy Hood and another basket by Haban to give Rabun its first lead since 6-4 with 1:57 to play in the first quarter.

Trailing 27-26 Columbia regrouped behind senior India Terrell who hit a pull up 15-foot jumper with 1:45 left in the third quarter to put Columbia ahead for good.

Haban and Terrell swapped three-point plays in the final 42 seconds and the Eagles (17-7) took a precarious 34-32 lead into the fourth quarter.

Terrell hit one of two from the free-throw line to open the final quarter of play and Mic’Kayla Spivey picked up a loose rebound and drove the length of the floor for a layup to make it 37-32 in favor of Columbia with 4:49 to play.

Another pull-up jumper by Terrell a 6-0 run for Columbia aided by a charging call against Rabun and a jump ball call going to the Eagles. Nia Anderson showed off her pull up jumper for a basket in the run and then hit Spivey up the floor following a rebound for another layup go make it 45-37 with 1:12 remaining in the game.

Terrell hit two free throws and Tekiarah Jones hit one of two to make it 48-41 with 22.5 on the clock. A Rabun miss turned into a Spivey rebound and pass to Terrell for a final basket with four seconds to play for the final of 50-41.

Rabun was led by Gracie Deetz with 12 points and 8 rebounds with Carley Haban chipping in 12 points of her own.

BOYS – Columbia 57, Callaway 56
The No. 4 ranked Columbia Eagles led by 12 points in the second quarter but needed a score in the final 10 seconds to pull out a 57-56 road win over Callaway on Saturday night.

Callaway hit four consecutive free throws with six minutes remaining to take the lead at 52-50 over the Eagles. Columbia’s Kenneth Hardaway responded with a three-pointer to put the Eagles back ahead at 53-52.

A Javonte Boddie basket gave Callaway the lead back at 54-53 with four minutes to play. Columbia’s Mason Lockhart gave the lead to the Eagles with a bucket at the two minute mark for a 55-54 lead.

Callaway regained the lead at 56-55 with under a minute to play. Eagles guard Kawasiki Ricks boded up under the basket for a layup with 10 seconds to play to again take the lead at 57-56.

The home team had five seconds left and were inbounding under their basket when a foul was called Columbia after the inbounds pass. The foul sent Jaylen Sheperd to the line for a one-and-one. He missed and Callaway got the ball but could not score as the Eagles held on for the win.

Columbia goes on the road for the third playoff game in a row heading to face the No. 7 ranked Washington County Golden Hawks on Wednesday at 6:00 pm. Washington County (16-1) defeated Westside of Augusta 61-51 to advance.