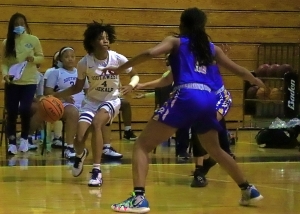 A tenacious defense and total control of the backboard created the perfect storm as the No. 4 ranked Southwest DeKalb Lady Panthers dominated the No. 6 ranked Cass Lady Colonels in a 72-46 blowout in the Class 5A Sweet 16 high school basketball playoff game on Friday night at Southwest DeKalb.

The defense forced six first quarter turnovers including their opening score of a 6-0 run to start the game. Aniya Lee made the steal and passed up the floors to Pryia Thompson for the layup and the first of her 10 assists in the game.

Taylor Christmas had a layup and Lee inbounded to Adrieanna Brownlee under the basket to make it 6-0 with 5:56 to play in the quarter.

Claire Davis hit a pair of free throws to cut it to 6-2 and it would be as close as Cass would get the rest of the way.

Lee hooked up with Brownlee twice more and Lauryn Bell got an offensive put back to make it 12-2. Two three-pointers by Thompson from the wing set up by Lee’s passes from up top put the Lady Panthers up 18-10.

Cass cut it to 18-12 to open the second quarter only to have the Panthers answer with a 10-0 run to push the lead to 28-12. Alex Jackson got it rolling with a three-pointer set up by another Lee assist followed by an old-fashioned three-point play by Brownlee to make it a double-digit for the rest of the game.

Lee had a drive to the basket and Thompson added a stick back to up it to a 16-point margin with 5:40 to play in the first half.

Londaisha Smith got the Colonels (25-2) off to a quick start in the third quarter with a pair of layups. Once again, the Panthers (20-6) answered as seven different players scored in the period.

Bell’s rebound for a layup and an and-one made it a 61-31 advantage with 1:30 to play in the third quarter. Southwest would take a 63-36 lead into the fourth quarter.

Southwest DeKalb finished with a 54-23 advantage on the boards that led to control of the game.

Four Panthers scored in double figures for the game led by Lauryn Bell with 15 points, Adrieanna Brownlee with 14 points and 15 rebounds, Pryia Thompson added 14 points and 12 rebounds and Taylor Christmas hit for 13 points.

Londaisha Smith finished with a game-high 22 points to lead Cass.

Southwest DeKalb advances to the Elite Eight and plays host to Woodward Academy (19-1), a 71-47 winner over Coffee in the Sweet 16. The game will played Tuesday with a time yet to be set.