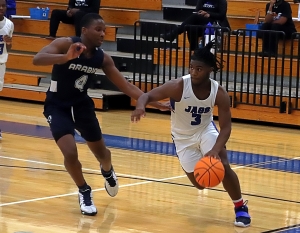 The two teams played to a 30-30 tie after three quarters that featured seven lead changes along the way on senior night in front of fans at home for the first time this season.

Stephenson struck first in the fourth quarter taking a 32-30 lead quickly on a Nazir Hargrave put back of a missed shot. Arabia Mountain answered with a Kevin Ampanson three-pointer to take its final lead of the night at 33-32.

The Jaguars went on a 12-3 run fueled by a pair of Chase Ballard three-pointers and three baskets by Jaylen Patterson, the last of which was a dunk on a feed from Walker to make it 44-36 with 1:31 to play.

Tyler Barton went one for two from the line for Arabia Mountain to cut the lead to 44-37, but the Jaguars then played keep away with the ball forcing the Rams to foul to stop the clock. The bonus foul came with 41 seconds left sending Walker to the line with a one-and-one attempt.

Walker hit both free throws to extend the lead to 46-37 and Arabia Mountain’s Bryant Graves stepped up with a big three-pointer to trim the lead to 46-40 with 23 seconds to play.

The Rams fouled Walker who again hit both free throws to push the advantage back out to 48-40 and after a missed shot Walker was gain fouled with 9.6 seconds and hit one of the two to make it 49-40.

The Rams got a meaningless basket as the clock was running out to make it 49-42.

Chase Ballard finished with a game-high 17 points to lead the Jaguars and Jaylen Patterson chipped in 16 points and 7 rebounds. 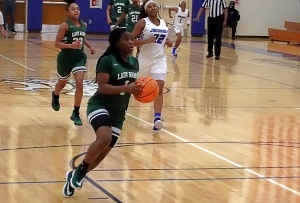 Arabia Mountain’s Myori Pruitt (1) rushes up court on a fast break for a basket ahead of Stephenson’s Zoey McMicken’s (22) during Arabia’s 55-52 win. (Photo by Mark Brock)

(G) Arabia Mountain 55, Stephenson 52
The No. 4 ranked Arabia Mountain Lady Rams hit just 7 of 19 free throws but connected on three of four in the final 27 seconds to hold off the Stephenson Lady Jaguars 55-52 to bounce back from a tough loss to Marist earlier in the week.

Leading 52-50 after Stephenson’s Taj Hunter scored the fourth of her six points in the final 2:18 of the game Arabia Mountain’s Sierra Burns was fouled with 27.2 seconds to play. Burns hit the front end of the one-and-one but missed the second.

Hunter was up the court and took a pass running the baseline to the basket for a layup with 17.1 seconds to play. Arabia Mountain fouled Jordyn Ward with 15 seconds to go to send her to the line for a one-and-one opportunity. Ward sank both to make it 53-50, but Stephenson still had a chance to tie with a three-pointer.

Stephenson missed a long three, but Sabrina Russell claimed the offensive rebound underneath only to have her shot blocked by Ward who grabbed the ball with three seconds to play and dribbled out the clock to seal the win.

Stephenson responded with an 11-0 run aided by three Arabia Mountain turnovers. Kelli Finkley had a pair of pull up jumpers in the run to go with a Nilah Lynch three-pointer to take the lead. Russell drove to the basket with 3:59 left in the third quarter to give Stephenson a 35-31 lead, its first since a 7-4 advantage with 4:37 left in the first quarter.

Arabia Mountain ended the quarter on a 7-0 run as Jirah Snellings kicked it off with a three-pointer at the 1:23 mark to knot the game at 39. Jones added a drive and Makayla Jamison scored on a dish from Ward to give Arabia a 43-39 lead heading into the fourth quarter.