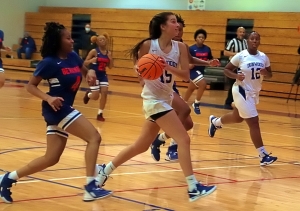 Dunwoody’s Gabby Livtak (15) drives down the lane as Berkmar’s Jaylen Tucker (4) and Dunwoody’s Alani Moore (12) trail on the play. (Photo by Mark Brock)

Jordan Strozier and Gabby Livtak scored 16 points each to lead the Dunwoody Lady Wildcats to a 70-20 Region 7-7A win over the Berkmar Lady Patriots in the opener at Dunwoody on Tuesday night.

Livtak got the Lady Wildcats rolling in the first period scoring four points, getting two steals and an assist as Dunwoody led 11-6 at the end of the period. Ellie Hall’s basket with under 30 seconds remaining came on an assist from Alani Moore following her steal.

Strozier kicked off the second quarter completing an old fashioned three-point play after being fouled on a made layup. She would go on to score seven points in the quarter. Moore’s three-pointer at the buzzer made it 29-10 as Dunwoody outscored Berkmar 18-4 to take control of the game.

Dunwoody opened the second half with five quick points from Strozier and a layup by Jamaya Joe to make it 26-10 with 5:33 to play in the third period.

Hall would score three baskets on assists by Joe (2) and Strozier while assisting on two baskets by Moore and one each by Madison McGeorge and Jackie Smith to extend the advantage to 52-15 with a 16-2 run in the final 4:51.

Strozier struck for four points in a quick 8-0 run by the Wildcats to open the fourth quarter and Livtak would complete her night after sitting with foul trouble hitting a pair of three-pointers and a layup in the final minutes of the rout.

Hall finished with 12 points and Joe with 10 to join Strozier and Livtak in double figures for the night. Strozier also pulled down nine rebounds to go with her 16 points for Dunwoody which improved to 1-2 overall and 1-1 in region play. 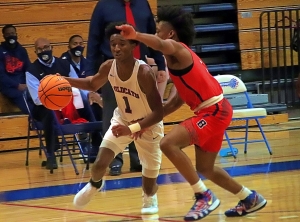 Dunwoody’s Mekhi McKinney (1) is fouled as he drives past a Berkmar defender. (Photo by Mark Brock)

(B) Berkmar 69, Dunwoody 45
The Berkmar Patriots put together an 11-0 run to open the fourth quarter to seal their 69-45 Region 7-7A boys’ victory over the Dunwoody Wildcats in the nightcap at Dunwoody.

Trailing 46-36 heading into the fourth quarter, Dunwoody (1-2, 0-2) went cold from the field along with several turnovers to go scoreless for almost five minutes and the Patriots (11-4, 4-0) took advantage.

Destin Logan got it started just 18 seconds into the second period with a layup and would add four more points in the 11-0 run to go with a three-point play by Jameel Rideout who also added a layup as the lead ballooned to 57-36 with 3:25 to play.

Mekhi McKinney’s jumper just outside the lane broke the drought for Dunwoody, but the Wildcats would manage just seven more points in the game.

The Wildcats trimmed a 35-24 halftime lead by Berkmar to six (35-29) with five quick points in the opening minute of the second half on a three-pointer by Will Wood and a 15-footer from the free-throw line by Cameron Weeks.

Rideout answered for the Patriots hitting a pair of three-pointers as Berkmar pushed the lead to 46-34. Ryan Smith has a short jumper with seven seconds left in the third to trim the lead to 10 (46-36) heading into the final quarter.

Dunwoody’s last lead of the game came with 1:48 left in the first quarter on a three-pointer to make it 11-9 in favor of the Wildcats.

Berkmar answered with a flurry and regained the lead on a free throw by Ahmed Joumahord with 30 seconds left in opening frame for a 12-11 advantage. Berkmar’s Tre Lock sent the Patriots into the second quarter up 15-11 with a three-pointer from the left corner at the buzzer.

Logan hit a three pointer from just to the right of the doll head with 4:10 left in the first half to put Berkmar up 29-15. Wood hit a three with four seconds left in the half to pull Dunwoody back within 35-24.

McKinney had a team-high in points and rebounds going for 15 on the scoreboard and seven rebounds. Will Wood finished with 12 points on four three-pointers.

Berkmar had five players in double figures led by Ahmed Joumahord with 16 followed by Jameel Rideout with 14, Destin Logan and Jalen Harris with 12 points each and Tre Lock with 11.