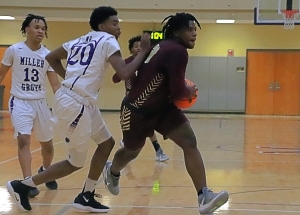 Tucker guard Raylan Barrian (with ball) gets past Miller Grove defenders Tyreik Boyd (13) and Matthew McCullum (20) for a fourth quarter basket in the Tigers 61-59 thriller. (Photo by Mark Brock)

A furious fourth quarter rally by the Miller Grove Wolverines came up just short as a game-tying basket at the buzzer was waved off allowing the Tucker Tigers to hold on for 61-59 win in non-region boys’ high school basketball action at Miller Grove on Friday night.

Wolverines coach Rasul Chester used his final timeout with 9.9 seconds left to set up a defensive play trailing by the two-point margin. Tucker’s Corey Pendergrass was fouled with 7.1 seconds to play but had both foul shots bounce off the rim with Miller Grove’s Jahmil Barber grabbing the rebound and getting the ball up the court.

A miss on a layup was rebounded by Jamarcus Glover as the clocked ticked down to zero. Glover put up a shot that went in the basket to potentially tie the game. A conference held by the referees ruled Glover still had the ball in his hands when the final buzzer sounded and disallowed the basket to send Tucker to the two-point win.

Tucker built a 16-point lead early in the fourth quarter David Giddens hit an old fashioned three-point-play with 6:05 to play in the game to make it 56-38 over the home team Wolverines.

Miller Grove’s Zyair Greene got the Wolverine rally started hitting a pair of free throws to get his team on a 7-0 which included a three-point play Barber and a pull up jumper by Tyreik Boyd to trim the lead to 56-45 with 4:27 remaining.

Christian Yeates broke the run with a layup on a feed from Raylan Barrian before Greene hit his 1000th career point and Boyd added a drive cutting the lead to single digits at 58-49 with 1:41 left.

Tucker went cold from the field and from the free-throw line missing the front end of two one-and-one situations to allow the Wolverines to close the gap even more. Barber responded for Miller Grove with a drive to the basket and a three-pointer to narrow the margin to 60-55 as the clock wound down to 40 seconds.

Boyd added another driving layup to close the gap to 60-57 with 28 seconds to play.

Miller Grove jumped out to an early 8-3 lead with 5:41 to play in the first quarter on a pull up shot in the lane by Boyd. The Tigers would respond going on an 11-0 run in the final 2:59 of the period to take the lead for good. Barrian had a layup and a three-point play to get things started and give the Tigers their first lead of the night. Corey Pendergrass’ pull up jumper gave Tucker a 19-14 advantage heading into the second quarter.

Giddens, Pendergrass and Christopher Whitmore each hit a three-pointer in the second quarter with Pendergrass scoring seven points along the way as Tucker built a 34-23 lead at the break.

Back-to-back drives to the basket in the final 1:01 of the third period by Barrian extended the Tiger lead to 49-34 with a quarter to play.

David Giddens led the way for the Tigers (2-1) with 17 points and 11 rebounds with Barrian chipping in 14 and Corey Pendergrass adding 13 points.

Miller Grove (0-2) got a 17-point, 7 rebound performance from Jahmil Barber while Zyair Greene hit the 1,000 point career mark with his 17 points and Tyreik Boyd put up 16 points. 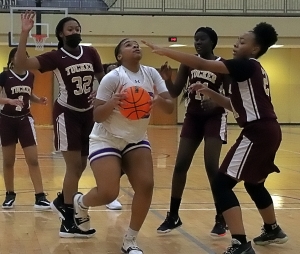 (G) Miller Grove 43, Tucker 35
Miller Grove’s Jalina Robinson scored nine of the 11 points in an 11-0 run in the fourth quarter to rally her team past the Tucker Lady Tigers 43-35 in girls’ action to open the night at Miller Grove.

Trailing 33-32 at the end of the third quarter, the Lady Wolverines went inside to Robinson quickly to start the fourth period. Robinson was fouled and hit one of two free throws to tie the game with 6:32 to play.

Miller Grove turned up the defense in the fourth quarter as well forcing five Tucker turnovers the first of which led to a Robinson layup off a dish from teammate Jaylen Clark to make it 35-33 with 6:23 remaining.

The Lady Wolverines would not trail again as Clark got into the act with an offensive rebound to make it a four-point margin 37-33 at the 4:32 mark of the final period.

Robinson started a string of six consecutive points on her own with a baseline drive followed by drive down the lane and a nice layup on an assist from Jalisa Mann to make it 43-33 with 2:33 remaining.

Aaliyah Goodall got Tucker’s final points with a drive down the lane against the Miller Grove defense for the final margin of 43-35.

Mann had the hot hand early for Miller Grove hitting two three-pointers in the opening quarter to go with a steal and layup for a 14-9 lead with 2:27 to play in the frame. Two free throws by Daiyah Ruger and a jumper by Goodall cut the lead to 14-13 heading into the second quarter.

A three-point play by Ruger with 6:58 left in the first half gave Tucker its first lead of the game on the way to a 27-21 halftime lead. Mann scored four points in an 8-0 run by Miller Grove to open the second half to take a brief 29-27 lead.

Ashoul Yak knotted the game for the second time in the quarter on a put-back as Tucker would take the 33-32 lead into the fourth quarter after the game being tied three times along the way.

Jalina Robinson finished with 19 points and 15 rebounds to lead Miller Grove (1-2) to its first win of the season. Jalisa Mann added 15 points for the Lady Wolverines and Jaylen Clark added 9 points and 13 rebounds.