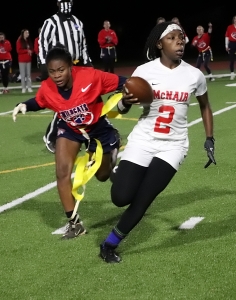 The McNair Lady Mustangs put two touchdowns on the board in the final 3:44 to win their girls’ flag football contest 19-6 over the Dunwoody Lady Wildcats on Wednesday night at Avondale Stadium.

McNair (3-4) marched down the field to the Dunwoody 13 before the Wildcats defense behind the play of Courtney Craft who was in on three tackles for a loss stopped the Mustangs on fourth down to get the football with 6:35 to play.

Dunwoody was forced to punt on fourth down to give McNair the football back with 3:44 to play on the Dunwoody 34. The Wildcats forced McNair to go for it on fourth down and Kei’Asia Clayton just made the first down on a three-yard run to get a fresh set of downs.

The following play Clayton tossed a short pass in the right flat to Semora Lazenby who took the ball 30 yards down the sideline for the go-ahead touchdown with one minute left to play in the game. Clayton ran in the extra point to make it 13-6.

Dunwoody failed to get a first down and McNair held at the Wildcat 9 after a pass went incomplete on fourth down. To’Niyah Butler got around the right end for a nine-yard touchdown run to close out the game with a 19-6 victory for the Mustangs.