Lakeside claimed the Region 4-6A girls’ cross country title as part of 9 DCSD teams to qualify for the state meet on Nov. 6-7. (Photo by Mark Brock)

The Lakeside Lady Vikings won the Region 4-6A title to lead a group of nine state qualifiers from DeKalb County cross country programs.

Lakeside placed six runners in the Top 10 of the 4-6A Girls’ Championship to run away from North Atlanta (45) and Westlake 62 to claim the championship trophy. 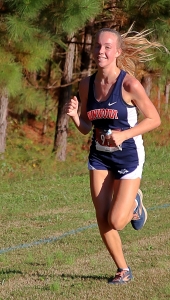 Norcross was second with 48 points.

The Wildcats came up just three points shy of qualifying for state with 108 points in the boys’ race just behind Discovery’s 105. Archer (29) won the meet followed by Norcross (31) and Duluth (100).

Dunwoody’s Ethan Archibald came up just two places shy of qualifying for state as an individual taking eighth with a time of 17:30.8.

Region 5-5A
Chamblee qualified both its girls’ and boys’ teams for state as the two squads both took third place finishes in the Region 5-5A Cross Country Championships at Decatur’s Legacy Park.

The Lady Bulldogs (71) had three runners finish in the Top 11 to claim a spot in the state meet with a third place finish of their own. St. Pius X (19) was first with Decatur (56) ahead of Chamblee in second. Clarkston (153) was fifth and Southwest DeKalb (185) was sixth.

Region 6-4A
Druid Hills claimed the runner-up spot in the boys’ and girls’ Region 6-4A cross country championships to claim berths in the state meet.

The Red Devils (42) claimed second behind Marist (17) in the boys’ championship. Emmanuel Green was seventh with a time of 17:59.0 to lead Druid Hills while teammate Will Goldsmith was eight in 18:02.0.

Marist (15) swept the top five spots in the girls’ race and Druid Hills captured the eighth through 13th spots for second (50) while Stephenson (84) qualified for state with a third place finish.

Region 6-2A
Towers did not field a full team in the Region 6-2A boys’ meet, but put three runners in the Top 21.

The GHSA State Meets are set for Friday, November 6 and Saturday, November 7 at the Carrolton Course at Carrollton (GA) High School.

The schedule is a follows: