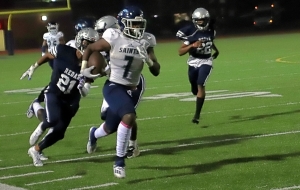 Cedar Grove’s Rashod Dubinion (7) was off to the races on the way to a 55-yard punt return against Redan in the Saints’ 70-0 win. (Photo by Mark Brock)

Austin Smith threw for 219 yards and three touchdowns to lead the No. 1 ranked Cedar Grove Saints steamed past the previously undefeated Redan Raiders 70-0 on Thursday night at Hallford Stadium.

The Saints wasted little time in getting on the scoreboard as Smith found Trevon Ferrell over the middle for a 27-yard touchdown pass with 11:41 to play in the first quarter following Cedar Grove’s fumble recovery on Redan’s first possession. Luis Dominguez added the PAT for the 7-0 lead.

Quinterio Lawson made it 13-0 with an eight-yard touchdown run with six seconds left in the first quarter. The two-point try was no good.

Rashod Dubinion picked up the first of his three touchdowns of the game on a one yard run that was set up after an Antonio Taylor interception early in the second quarter. He added the two-point run to make it a 21-0 with 9:20 left in the first half.

Lawson scored his second touchdown of the game on a 10-yard run bouncing off a couple of tacklers and reaching backward to put the ball into end zone with 4:51 left in the half. Ferrell ran in the two-point conversion to make it 29-0.

Dubinion scored on special teams with 2:13 remaining as he hauled in a punt at his own 45, got outside along the right sideline and raced 55 yards for the touchdown. Amari Forte kicked the PAT to push the lead to 36-0.

The Saints forced a punt with 40 seconds left and second and 10 from the Redan 27 Smith found Sam Pittman down the middle for a 27-yard scoring pass as the clock ticked down to zero. Forte was good again on the PAT for a 43-0 halftime lead.

Cedar Grove took just four plays to score to open the second half with Smith connecting with Bernard Mack across the middle for 45 yards. A bad snap on the PAT kept the score at 49-0.

Smith hit on 11 of 17 passes for his 219 yards to lead the way for the Saints. Cedar Grove’s defense held Redan under 100 yards of total offense in the shutout.

Cedar Grove improves to 3-0 overall and 2-0 in Region 5-3A heading into a big Region 5-3A trip to face Greater Atlanta Christian next week. Redan falls to 2-1 overall and 0-1 in region action.