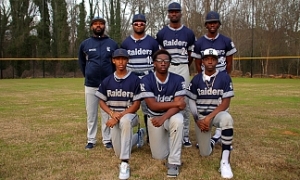 Redan survived five games in two days to the tune of a 5-0 record in leading the way among DeKalb County teams in another week that was almost washed away again by rain.

Coach Alexander Wyche’s Redan squad easily swept a March 6 home doubleheader from Miller Grove by the respective scores of 15-0 and 17-2, pulled out a tough March 7 home twinbill clash against Maynard Jackson by the tallies of 5-4 and 8-5 and then came back later in the day on March 7 to roll past Columbia by the final count of 11-1.

Senior Brandon Lamback produced the biggest highlight among many in Redan’s five-game victory march last week. Lamback tossed a no-hitter in helping the Raiders to a 15-0 decision over Miller Grove in the first game of a March 6 doubleheader, striking out nine and allowing no hits or walks.

The Raiders recorded eight hits in a 5-4 victory over Maynard Jackson March 7, led by sophomore Jason Avila (2-3; 1 RS; 1 2B) and Lamback (2-3; 2 SB). Lugo picked up the pitching triumph, starting and going five innings with nine strikeouts against four hits, three walks and one earned run.

Redan came back to knock off Maynard Jackson again in the nightcap of the March 7 twinbill by the final count of 8-5, as Lugo (2-3; 2 RBI; 1 RS; 1 2B) shined brightest on the offensive end. Redan then closed out the marathon weekend of games with an 11-1 decision over Columbia March 7 at Redan. Lugo again paced the offense, going 2-2 with two runs scored, two stolen bases and one RBI. Junior Terrance Sales turned in a strong effort on the pitching end, starting and going the first four innings with six strikeouts, two hits allowed, two walks allowed and one earned run allowed.

The Raiders out-scored the opposition by a 56-12 margin in improving to 10-4 overall on the season.

Tucker bounced back from a difficult 0-7 start to win a pair of games last week and jump to the top of the early Region 4-AAAAAA standings.

Coach Eric Love’s Druid Hills Red Devils hit the road to Paideia March 7 and came away with an exciting 4-2 victory. Druid Hills thus went 1-0 on the week and improved to 4-1 overall with the road decision.

Lithonia also broke into the victory column for the first time in 2020, winning 5-3 at home against Morrow March 7. Coach Samuel Marion’s Lithonia Bulldogs closed the week with a perfect 1-0 effort and moved to 1-5 overall on the year.

Lithonia rode the stellar offensive outings of senior Osiris Corker (3-3; 2 RS) and junior Marcellous Allen (3-4; 1 RS; 1 3B) to a 5-3 triumph over Morrow March 6. Senior Theodore Riddick was sharp in claiming the pitching decision, striking out four and allowing five hits, one walk and two earned runs over six innings.

The Lions then dropped a heart-breaking 8-7 defeat to Mt. Zion in the March 7 twinbill nightcap. Senior Jeremy Cain went the complete six innings on the pitching side, striking out seven while allowing four hits, six earned runs and three walks.

Southwest DeKalb only managed to get one game in, dropping a 7-2 decision March 7 at home to Westlake. Senior Dante Alexander turned in a solid effort in defeat on the pitching mound, striking out six and allowing five hits, three earned runs and three walks over four innings. Sophomore Sadir Ryan (1-2; 1 RBI; 1 2B), senior Mark Pecke (1-3; 1 RS; 1 2B), freshman Antrez McDowell (1-2; 1 RS; 1 3B) and sophomore Nicholas Williams (1-3; 1 RBI) produced the majority of the offensive highlights.

See link below for all Week 4 scores: