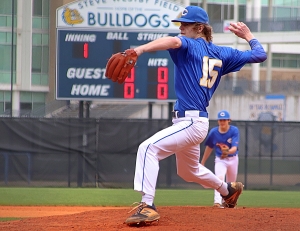 Chamblee’s Taylor Flowers came very close to a complete game no-hitter in his 6-0 shutout of the Miller Grove Wolverines in Region 5-5A play on Tuesday at Chamblee. (Photo by Mark Brock)

Chamblee pitcher Taylor Flowers came within one two-out, infield hit of throwing a complete-game no-hitter in the Bulldogs’ 6-0 Region 5-5A victory over the Miller Grove Wolverines on Tuesday at Chamblee.

Flowers struck out 13, walked three and gave up just an infield single to Miller Grove’s Jakoby Oliver with two out in the fifth inning in a dominating performance on the mound.

The sophomore also accounted for the only run he would need in the bottom of the first inning as he drew a leadoff walk and courtesy runner Lleyton Leonard entered to run the bases. Leonard stole second and two wild pitchers later scored the first run of the game for a 1-0 Chamblee lead.

Flowers got a four-run inning started in the bottom of third as he collected the first hit of the game with a single into left field with one away.

Miller Grove starting pitcher Jathan Smith had trouble with his control walking three batters with two out to allow three runs to score. Then a single by Chamblee’s Pete Constantinides into right past a diving Yahodahn Mangrum at second base to plate the fourth run of the inning to give the Bulldogs 5-0 lead heading into the fourth inning.

Flowers set the Wolverines down in order in the top of the fourth to face the minimum batters of 12.

The Bulldogs (6-7, 1-0) added another run in the bottom of the fourth as Leon Schmidt reached on an error, stole second and scored on a Leon Cohen grounder to the right side to make it 6-0. 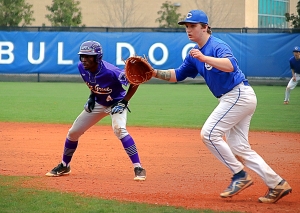 Miller Grove’s Jakoby Oliver (4) gets a lead off first as Chamblee first baseman Leon Cohen moves to get in his position on defense. (Photo by Mark Brock)

Oliver’s infield single produced the Wolverines second baserunner of the game. Flowers struggled against the next two batters allowing walks to Rashard Cheeks and Dajuan Holliday to load the bases. He picked up his 10th strikeout of the game to end the threat and keep the lead at 6-0.

The Wolverines went down in order in the sixth and Flowers allowed an inning opening walk to Thylen Whittaker in the top of the seventh before recording three straight strikeouts to end the game.

Flowers finished four innings in the game without allowing a baserunner as he set the Wolverines down in order in the first, third fourth and sixth innings.

Miller Grove’s Jakoby Oliver pitched three innings of relive allowing one unearned run with one strikeout and two walks to keep the Wolverines (0-4, 0-1).