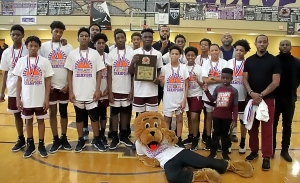 Jadan Baugh scored 34 points and grabbed 10 rebounds to lead the Salem Lions to a 51-35 victory over the Champion Chargers at Miller Grove High School on Saturday to capture their first DeKalb County Middle School Boys’ Basketball Championship according to records dating back to 2008.

Baugh came out hot in the first quarter scoring the Lions (15-2) first eight points and 16 total in the quarter to help build a 22-3 lead. Champion managed just one free throw by Arrington Watkins and an offensive put back by Peyton Marshall in the quarter.

All six Salem points in the second quarter came from Baugh as they led 28-10 at the break.

The Lions took a 36-21 lead into the fourth quarter and Baugh hit a three-point play and a three-pointer for a 17-point cushion with 4:30 to play in the game when Champion put together a run to close the gap to 10. 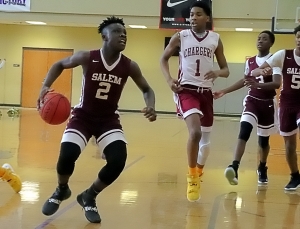 Marshall scored six points in a two-minute span including a put back off a missed free throw to pull the Chargers (15-2) within 43-33 with 2:10 to play.

Shondell Heath would hit three of four free throws and Baugh added a layup on a dish by Heath and was three of five from the line in the final 1:35 and Champion managed just two free throws as the as Salem pulled away to the 51-35 victory for the title.

Heath added nine points and four rebounds as the Lions knocked off the Chargers after having lost the regular season meeting 56-49 back on January 18.

Peyton Marshall had a 16-point, 22 rebounds double-double to lead the Chargers in the game.