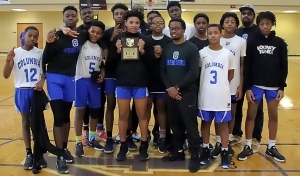 The Columbia Eagles outscored the Stone Mountain Pirates 30-20 in the second half to clinch a 46-36 victory in the DeKalb County Middle School Basketball Championships boys’ consolation game at Miller Grove High School on Saturday.

The two teams went into the half tied at 16-16 as Stone Mountain’s Malik Hinton hit a pull-up jumper from 12 feet just before second quarter ended.

Sanchez Brown opened the fourth quarter with a three-pointer to extend the lead to six, but the Pirates would rally back within 28-27 with 3:49 to play on a basket by Devin Sheppard. 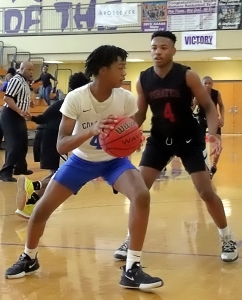 Brown had another three to go with another basket and Morris added two free throws and a steal for another score as the lead was upped to 39-31 with 3:32 remaining.

Mekhi Turner scored three points and Brown added a steal for an easy layup as the lead climbed to 43-32 with 1:20 to play. Sheppard hit a pair of free throws and Judah Blyden hit a basket to cut the lead to seven (43-36) with 18 seconds remaining.

Thomas Alemu hit a three-pointer for the final 46-36.

Sheppard led the Pirates with a game-high 16 points and teammate Daelin Porter hit for 9 points and grabbed seven rebounds.