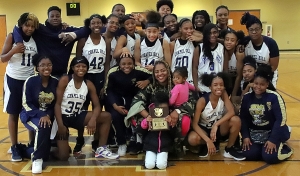 Lithonia (13-4) had lost 44-27 to Chapel Hill (16-1) during the regular season, but behind 14 first-half points from Alika Daugherty jumped out to a 25-8 at the break. Daugherty ended the half with two old-fashioned three-point plays to provide the final push to the 17-point advantage.

Camille Files and Monea Smith contributed four points each in a 16-3 run during the third quarter to pull within 28-24 going into the final quarter of play.

Files had a steal for a basket with 5:18 to play to give Chapel Hill its first lead of the game at 29-28. The 7-1 run to open the fourth quarter by the Lady Panthers included four of six shooting from the line by Smith. 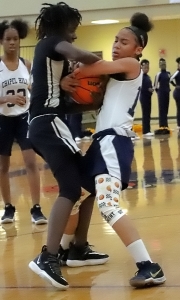 The game was tied twice over the next three minutes including 33-33 on two free throws by Daneeshia Norman with 2:33 remaining.

Daugherty scored her second basket of the game as she drove the court for a layup with 1:45 left to give Lithonia the lead again at 35-33.

Kennedy Johnson hit a short jumper with 1:27 to play to pull Chapel Hill even once again at 35-35. Three turnovers aided the Lady Panthers over the next 1:04 of the game as they took a 38-35 lead. Files hit a free throw and Smith made a steal for a layup with 14 seconds remaining for the three-point lead.

Jonasia Davis hit a free throw with 4.9 seconds to play to pull Lithonia within two. Daugherty made a big defensive play causing a Chapel Hill player to lose the ball out of bounds under the Lithonia basket with 1.1 seconds left on the clock.

Lithonia inbounded the ball only to have it knocked away as time ran out to preserve the win for Chapel Hill.

Smith hit for 13 points and had nine rebounds to lead Chapel Hill and Files added 11 points and five rebounds. Daugherty had a game-high 19 points to lead Lithonia. Jonasia Davis had six points and seven rebounds and Daneeshia Norman had two points and 11 rebounds.