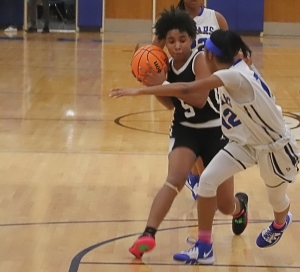 A 21-point fourth quarter by the No. 7 ranked Stephenson Lady Jaguars turned a six-point deficit into a 57-51 Region 4-6A victory over the Martin Luther King Jr. Lady Lions at Stephenson on Tuesday night to start a Stephenson sweep on the night.

Trailing 42-36, the Lady Jaguars (14-4, 8-3) opened the fourth quarter with a three-pointer by Zikiya Walker and two minutes later Walker drove the middle of the lane, powering her way in for a layup to knot the game at 43-43 with 5:07 to play.

Kassidy Broussard drove to the basket for a layup with 3:22 to play to give Stephenson the lead for good at 45-43. After a Walker rebound, Kelly Finkley drove for a layup to push the lead out to 47-43 with just 1:54 to play.

Arkansas-Pine Bluff signee and 1,000-point scorer Ashlynn Green kept the Lady Lions within striking distance with a pair of three-pointers that had M.L. King within 50-49 with 50 seconds to play.

Finkley had another driving layup to extend the lead to 53-49 with 45 seconds to play. Broussard and Jirah Snellings both hit two free throws in the final 14 seconds to close out the 57-51 victory following a pair of Lady Lions’ turnovers.

The Lady Lions (9-8, 5-6) had jumped out to a 12-1 lead in the first quarter on back-to-back three-pointers by Green and Alaija Coates before a Finkley three-pointer helped the Lady Jaguars pull within 17-10 heading into the second quarter.

Green nailed a three-pointer early in the second quarter, Coates had an offensive put back and Torkeria Dash added a layup to make it 24-18 with 3:08 left in the first half.

Coates had another put back before the half to preserve a 26-22 lead.

Stephenson took a brief 33-31 lead with 4:11 left in the third quarter before five Lady Lions teamed up to 11-3 run for the 42-36 lead heading into the fourth quarter.

Green finished with a game-high 20 points to lead the Lady Lions while Coates finished with 10. Stephenson was led by Kennedy Barnett with 13 points and 11 rebounds and Kelly Finkley with 11 points. 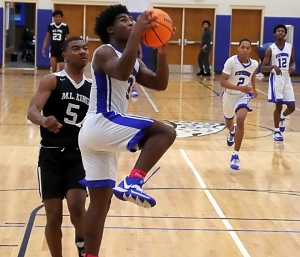 Stephenson’s Edwin Walker (3) goes in for a layup on a fastbreak ahead of Martin Luther King’s Deshun Dumas (5). (Photo by Mark Brock)

(B) Stephenson 70, M.L. King 56
Edwin Walker scored 12 third-quarter points to fuel a 29-15 run for the Stephenson Jaguars on the way to a 70-56 Region 4-6A victory over the Martin Luther King Jr. Lions to complete a sweep at Stephenson.

Walker had sent the teams into the half knotted at 23 after hitting one of two free throws in the final 34 seconds of the second quarter.

The Lions got out quick in the third quarter taking a 27-23 lead on a basket by Terrill Curb and one free throw each by Kharee Adderly and Terrin Wofford.

Walker began to heat up hitting a three to cut the lead to 27-26 and then added a drive to knot the game at 30 with 4:28 left in the quarter. Justin Harris hit a three-pointer to give the Jaguars a 33-30 lead just 18 seconds later and Stephenson would not trail again.

Seven more points by Walker and three-pointers from Caleb Parker and Jordan Ushery aided a 19-8 run to end the period with the Jaguars up 52-38.

The Lions cut the lead to 10 (42-52) with four consecutive free throws to open the final quarter of play as D’Vonja Frett and Kevion Bynes both hitting two each as the clock ticked down toward the seven-minute mark.

Harris hit four free throws, Walker added a basket and Parker hit a three as Stephenson pulled out to a 61-44 lead with 4:47 remaining.

Frett hit a long three from outside the top of the key with 1:39 to play that pulled the Lions within 10 (54-64), but Walker would hit three of four from the line and Parker added a layup on a pass from Walker to help finish off the 70-56 victory.

Walker finished the night with a game-high 25 to lead Stephenson in the win while Harris knocked down 16 points and Parker added 11. Ushery finished with eight points and 12 rebounds.