No. 1 Ranked Lithonia Improves to 12-0 with Win over Arabia Mountain 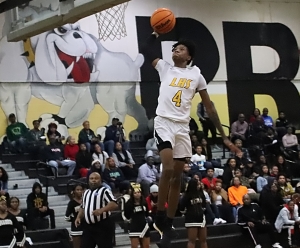 Lithonia senior guard Eric Gaines goes in for a dunk as part of his 33 points to lead the Bulldogs in a 67-58 win over Arabia Mountain at home on Tuesday night. (Photo by Mark Brock)

Eric Gaines hit for a game-high 33 points to lead his No. 1 ranked Lithonia Bulldogs to a hard fought 67-58 win over Regin 5-5A foes Arabia Mountain Rams at Lithonia on Tuesday night.

Gaines would hit 12 of his 33 in the fourth quarter to stave off a big rally by the Rams who trailed by as much as 17 in the third quarter.

Brandon Gunn (6 points) and Chase Ballard (4 points) led the Rams rally combining for a 10-0 run to end the third quarter to trim a 49-32 Lithonia advantage to 49-43 as Ballard beat the buzzer on a drive to the basket.

Gaines hit four consecutive free throws to open the fourth quarter as the lead went back up to 10 (53-43) with 7:27 to play in the game.

Ballard hit a three and with 4:50 to play connected on another drive to the basket as the Bulldogs lead dwindled to three (53-50).

A three-point play by Gaines with 3:51 remaining pushed the Bulldogs back up 57-50. Franklin Champion got inside for a pair of baskets and his layup with 2:54 to play offset another Ballard basket for a 61-52 advantage.

Gaines would hit four of six from the line in the final 2:10 and Javontae Jackson was two of four as the Bulldogs held the Rams at bey. 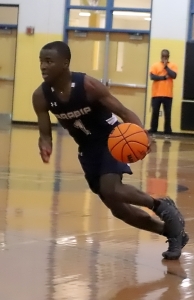 Arabia Mountain’s Brandon Gunn drives for two of his 16 points for Arabia Mountain against No. 1 ranked Lithonia. (Photo by Mark Brock)

Lithonia led by as much as 11(20-9) in the first quarter behind a barrage of three-pointers from Osiris Corker (3) and Gaines (2) only to have Gunn hit a three-pointer and another basket to pull Arabia Mountain (6-5, 2-3) within 22-16 heading into the second quarter.

Corker and Gaines would both hit a three in the second quarter and champion’s basket with 29 seconds left in the half gave the Bulldogs a 36-26 advantage heading into the break.

Gaines came out with 10 points in the first 4:23 of the third quarter, including back-to-back dunks with Champion that gave the Bulldogs their biggest lead of the night at 49-32.

Osiris Corker and Franklin Champion (7 rebounds) joined Gaines in double figures for the Bulldogs (12-0, 5-0) with 12 points each on the night.

Gunn finished with 16 points for the Rams, Ballard added 14 and Alhaji Mansaray added 11 points and 7 rebounds. 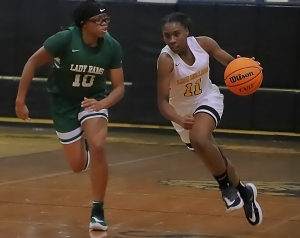 Lithonia’s Laila Williams drives against the defensive pressure of Arabia Mountain’s Sydney Bunkley (10). Bunkley and her Lady Ram teammates rallied from an early 10-0 deficit for the win at Lithonia. (Photo by Mark Brock)

(G) Arabia Mountain 44, Lithonia 25
Arabia Mountain capitalized on Lithonia turnovers in the second half to pull away to a 44-25 Region 5-5A girls’ victory in the opening game of the night at Lithonia on Tuesday.

Arabia Mountain was unable to take full advantage of the 26 first half turnovers by Lithonia mainly due to the Lady Bulldogs dominance on the boards with 25 first half rebounds.

Ten turnovers in the third quarter was too much for Lithonia to overcome as Jordyn Ward (3 free throws, 1 three-pointer) and Mikayla Jamison (4 points) pushed Arabia Mountain ahead 29-22 as Lithonia went the first 5:28 of the quarter without scoring.

Another Ward trey started the fourth quarter and Keyonna Giles would add a layup and a three of her own as the lead ballooned to 28-23 with 3:09 to play on Giles’ three.

Lithonia could only muster three fourth quarter points on a free throw by Zaryana Mitchell and a basket by Kimora Tanner.

Ward had 14 points to lead all scorers with Giles added 11 and Jamison 10 for Lithonia.