Warhawks Rally Past Red Devils to Complete 4-4A Sweep 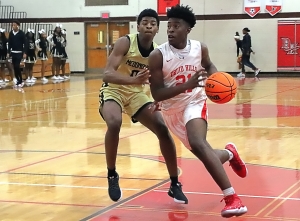 The McDonough Warhawks trailed for most of three quarters before rallying for a 56-53 Region 4-4A boys’ victory over the Druid Hills Red Devils to complete a sweep at Druid Hills on Friday night.

McDonough’s Bentley Fagan hit one of two free throws after being fouled on an offensive rebound with 0.4 seconds left in the third quarter to pull the Warhawks (2-4, 2-2) even with the Red Devils (3-5, 0-3) for the first time since the first 30 seconds of the game.

Lay Davis gave McDonough its first lead of the game 20 seconds into the fourth quarter via a layup to make it 43-41 with 7:40 to play.

Druid Hills answered as big man Seth Cushenberry stepped out and hit a three-pointer to regain the lead. Jaden Lingo’s three with 5:17 to play caused McDonough to call a timeout trailing 49-45.

The next two minutes of the game the Warhawks took advantage of four Druid Hills turnovers to climb back in front at 53-49 on Davis’ drive to the basket with 3:39 to play to end an 8-0 run.

Lingo had a drive for a basket and Emerson Mosley’s drive tied the game at 53-53 with 1:35 left in the game.

Jaden Sanders hit one of two free throws with 1:04 to play to put the Warhawks ahead 54-53. Another turnover by the Red Devils gave the Warhawks the ball with the lead and the clock ticking down under 30 seconds.

After the Druid Hills’ defense knocked the ball out of bounds, McDonough’s Jeqhuan Carter got free on the inbounds play for a layup and was fouled with 7.0 seconds left in the game. His free throw was off the rim and the Red Devils called timeout after Lingo pulled down the rebound.

McDonough fouled with 2.9 seconds left and the Red Devils had to inbounds the ball at half court. Lingo got free on the right wing for a three, but the ball rimmed out at the buzzer preserving McDonough’s 56-53 victory.

Lingo led all scorers with 20 points to lead the Red Devils who had three players in double figures including Emerson Mosley with 12 and Seth Cushenberry with 10. 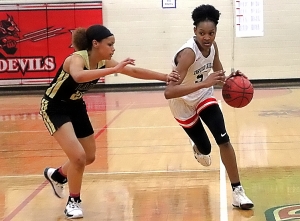 (G) McDonough 47, Druid Hills 39
Sky Watters had four points to lead a 6-0 run in the final two minutes as the McDonough Lady Warhawks pulled away to a 47-39 Region 4-4A girls’ victory over the Druid Hills Red Devils in the opener at Druid Hills on Friday night.

The game had been a back-and-forth affair through three quarters with eight lead changes before McDonough (3-4, 2-2) grabbed the lead for good at 31-28 on a three-pointer by Janiah Alexander late in the third quarter. McDonough took a 33-30 lead into the fourth quarter.

Watters opened the final period with a three-pointer and her basket with 4:00 to play gave McDonough a seven-point lead (39-32), its biggest of the game.

Watters would hit two free throws and a layup to helped seal the victory in the final two minutes. Alexander finished the game off with a pair of free throws with 12 seconds to play.

Watters led all scorers with 23 points and added 8 rebounds for McDonough.