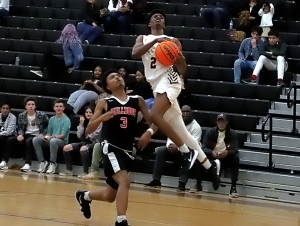 Second half rebounding and defense keyed several mini runs for the No. 2 ranked Tucker Tigers as they pulled away to a 70-45 Region 4-6A win over the Mt. Zion Bulldogs at Tucker on Tuesday night.

David Pattison helped the Tigers respond scoring the first six points in an 8-0 Tucker run on two free throws and two layups on nice feed from Raylan Barrion. Barrion got the final basket of the run to push the lead out to 40-28 with 3:19 to play in the third quarter.

Tyler Pendergrass got a runner in the lane to jump start a 10-0 run for the Tigers. Dylan Pritchett would can the next eight points which included a three-pointer from the right wing and a tough three-point play to give the Tigers a 50-34 lead heading into the fourth quarter.

Mt. Zion broke a 12-12 tie at the start of the second quarter on two free throws by I. Duffy, but the lead was short-lived. Tucker’s Pendergrass answered on the next possession with a three-pointer to give the Tigers the lead for good at 15-14.

Jermontae Hill added three treys in the second quarter as the Tigers built the 32-24 halftime lead.

Parker led the Tigers with 14 points followed by Hill with 12 (4 three-pointers), Raylan Barrion with 11 points and David Pattison with 9 points and 10 rebounds.

The Bulldogs got 15 points and 7 rebounds from E. Grier. 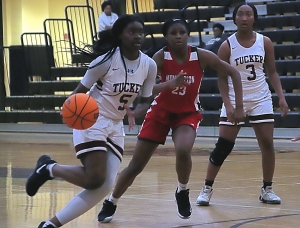 K. Wyatt hit a three-pointer to jumpstart the Mt. Zion run to open the game and would finish the run with an old fashioned three-point play to make it 10-0 with under two-minutes gone in the first quarter.

K. Hayes had six points in a 12-0 run to push the Lady Bulldog’s lead out to 22-3. Erica Parker’s three for Tucker broke the run.

Deja Humphries offensive rebound and put back with 12 seconds to play cut the Mt. Zion lead to 24-10 heading into the second quarter.

Mt. Zion outscored Tucker 12-2 in the second quarter to extend the lead to 36-12 at the half. Tucker’s lone basket came in the final two seconds on shot by Micalea Warner.

Tucker managed to play Mt. Zion almost even in the second half (20-24). Parker’s layup with 29 seconds left in the third quarter pulled Tucker within 46-20 heading into the fourth quarter.

Jecinta Hollins had a three-point play and added an offensive put back in the fourth quarter as the Lady Tigers kept pace in the final period of play. Warner added a three-pointer for Tucker.

Deja Humphries and Erica Parker had six points each to lead Tucker in the loss. Kennedy Collins added four points and eight rebounds for the Lady Tigers.

Thomas had 15 points to lead Mt. Zion, Hayes had 12 points and 8 rebounds with Wyatt added 12 points of her own.