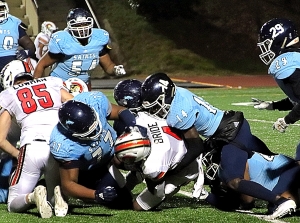 Cedar Grove defensive lineman Brandon Hall (77) and defensive back Latrelvin Blackemore (14) make a big first down stop inside the 10-yard line against GAC. The play was the first of three that kept GAC from taking the lead or tying the game with less than 5 minutes to play. (Photo by Mark Brock)

For the third time in four season the Cedar Grove Saints are in the Class 3A state title game as they face the Crisp County Cougars on Saturday in a 1:00 pm kickoff at Georgia State Stadium.

Senior linebacker Isaiah Ratcliff followed up his 19 tackle game against Peach County the week before with 14 tackles and stopped the Spartans scoring threat with 4:35 to play with a goal line interception he returned out to the Saints’ 35-yard line with Cedar Grove holding a 21-18 lead.

The Saints then rode the legs of senior running back Chavon Wright (217 carries, 1,736 yards, 20 TDs) as he closed out the game bursting through the middle of the Spartans’ defense for a 26-yard touchdown run with 42.7 seconds to play. The touchdown and Rodjel Caine’s PAT made the final margin of 28-18.

No. 6 ranked Crisp County had a tough game of its own in the semifinals rallying from a 6-0 deficit with two second half touchdowns for a 14-6 win. A.J. Lofton gave the Cougars (11-3) the lead for good with a minute left in the third quarter with a 5-yard touchdown. Leading 7-6, Lofton scored on his second 5-yard touchdown of the game with two-minutes to play to make it 14-6.

The Cougars then held off Jenkins with a Sirad Bryant interception in the end zone to close out the win.

Wright and running back teammates sophomores Rashod Dubinion (81 carries, 411 yards, 5 TDs) and Langston White (66 carries, 357 yards, 5 TDs) will be leading the ground attack the Saints have done so well this season piling up 2,992 yards and 40 touchdowns. 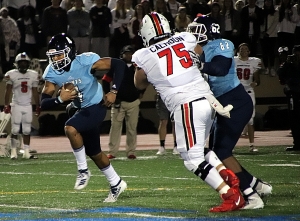 Junior Austin Smith has thrown for 1,459 yards and 18 touchdowns on the season as the Saints pick their moments to throw down the field. Smith’s main targets this are sophomore Janiran Bonner (29 receptions, 499, yards, 9 TDs), senior Coreyon Cone (17 receptions, 348 yards, 3 TDs) and Dubinion has come out of the backfield to haul in 16 receptions for 193 yards and three touchdowns.

Ratcliff has been all over the field in the playoffs for the Saints’ defense with 33 tackles in the last two games alone. Senior defensive end Alvin Williams (103 tackles, 14.5 sacks, 29 TFL) compliments Ratcliff along with junior defensive lineman Demarius Jackson (59 tackles, 3 sacks, 24 TFL) who has an interception return for a touchdown in the playoffs. Sophomore defensive lineman Christen Miller has only 27 tackles, but has 15 for a loss and 5.5 sacks.