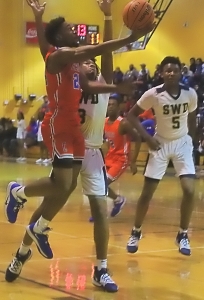 The unranked Columbia Eagles took advantage of two turnovers in the final 1:15 of the game to knock off the No. 5 ranked Southwest DeKalb Panthers 53-50 in an early key Region 5-5A boys’ contest at Southwest DeKalb on Tuesday.

Columbia’s Kawasiki Ricks started an 8-0 run by the Eagles on the next trip down the floor with an old fashioned three-point play on a drive to the basket and a free throw to cut the lead to 50-48 with 1:30 to play.

Solomon Holmes stole a pass under the basket following the Panthers’ inbounds play for a layup and was fouled. He hit the free throw with 1:15 remaining to give the Eagles (2-1, 2-0) a 51-50 lead.

Following another Panthers turnover Kwasiki Ricks was fouled while bringing the ball up the court and went to the line for the double bonus. Ricks hit both free throws to push the Eagles out in front 53-50 with 29.7 seconds to play.

Southwest DeKalb’s Eugene Brown III, who had 24 points in the game, got off a three with about six seconds to play, but it bounced off the rim and went out of bounds with 4.7 seconds remaining.

The Panthers got a turnover on the inbounds and got off two three-pointers in the final seconds including a hurried three by Walton at the buzzer that went long.

Columbia led by as much as five points twice in the first half, but a late basket by Michael Wright had rallied the Panthers to a 30-26 halftime lead.

A low scoring third quarter still had the Panthers up 35-31 heading into the fourth quarter. Holmes pulled the Eagles even at 37-37 with 5:36 to play on an offensive rebound off a missed free throw.

Southwest DeKalb quickly jumped back out to a five-point lead on a short pull up by Walton and a pull up three by Brown to make it 42-37 with 4:36 to play.

The Eagles would not quit forcing the late turnovers to pull out the win.

Columbia had four players in double figures led by D’Kwon Harris (8 rebounds) and Ricks with 12 points each in the game. Devin Longstreet added a double-double of 10 points and 12 rebounds and Holmes finished with 10 points. 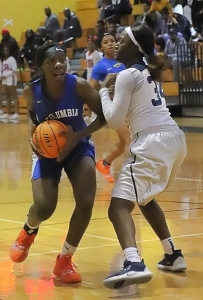 Columbia’s Elese Warren (with ball) works inside against Southwest DeKalb’s Aniyah Lee (34). Warren had an 11-point, 10 rebound double-double in the game won by Lee and her Lady Panther teammates 44-42. (Photo by Mark Brock)

(G) SW DeKalb 44, Columbia 42
Nya Bostic had two layups in the final 19 seconds to propel the No. 6 ranked Southwest DeKalb Lady Panthers to a thrilling 44-42 win over the Columbia Lady Eagles in the girls’ contest to open the night.

India Terrell hit four free throws and had a drive to the basket to close the gap to 40-39 with 1:25 remaining. Columbia got the ball back as Daija Carr was fouled on a defensive rebound and went to the line for two free throws. She sank both to knot the game at 40-40 with 1:13 left in the game.

Terrell made a steal and Carr went to the line for two more free throws with 29.1 seconds. She hit one of two to give Columbia its first lead since the second quarter at 41-40.

Her second shot came off the rim and Adrienna Brownlee rebounded for the Panthers and passed up the floor. Bostic was ahead of the Eagles’ defense for an easy layup to give Southwest DeKalb a 42-41 lead with 19 seconds left. Just nine seconds late she made it a three-point advantage following a Columbia turnover with a layup but missed a free throw to keep the door open for the Lady Eagles with 6.7 seconds to play.

Carr was fouled on a three-point attempt with 0.3 seconds to play and went to the line for three free throws. She hit the first one, but missed the last two as the Panthers held on for the win.

Bostic finished with 10 points to lead Southwest DeKalb (5-0, 2-0) and Aniyah Lee added nine. Columbia got a game-high 18 points from India Terrell and an 11-point, 10-rebound double-double from Elese Warren.