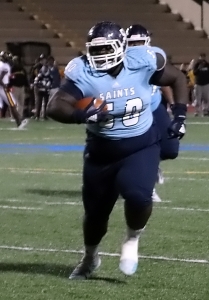 Cedar Grove scored three times on defense on the way to an impressive 36-3 victory over the No. 1 ranked Peach County Trojans at Godfrey Stadium on Friday night to advance to the Class 3Aa football playoff semifinals.

The Saints’ defense scored two first half touchdowns and shut down the high-powered Peach County offense with 14 plays for losses totaling 72 yards in the game.

Peach County (11-2) had three dives deep into Cedar Grove territory in the first half with two ending on fumbles and a 32-yard field goal by Jonathan Lupian with 9:39 left in the first half for the Trojan’s only lead of the game at 3-0.

The Saints (11-2) answered right back as Austin Smith hit Rashod Dubinion in the end zone on a 23-yard touchdown pass with 6:25 left in the first half. Rodjel Caine’s PAT was good to give the Saints the lead for good at 7-3.

Peach County drove right back down the field to the Saints’ 35 and on first and 10 Zion Shaw went around the left side for a gain of five yards. As Shaw was corralled Cedar Grove’s Jordan Grier pulled the ball away and raced 70 yards for the Saints’ first defensive score of the night with 4:24 to play in the first half. A two-point try was no good for 13-3 Cedar Grove leave.

Two plays after the Cedar Grove kickoff defensive lineman Demarius Jackson grabbed a Jaydon Gibson pass at the Trojans’ 40-yard line and rumbled 40 yards running over three Trojans on the way to a touchdown. Caine added the PAT again for a 20-3 Saints lead with 3:49 to play in the first half.

The score remained at 20-3 until the Saints’ second possession of the second half. Chavon Wright set up Rashod Dubinion’s eight-yard touchdown run with a 45-yard run. Louis Dominguez added the PAT to give the Saints a 27-3 lead with 5:53 left in the third quarter.

Cedar Grove picked up its third defensive score of the night with 9:05 left in the game as a bad snap for the Trojans traveled 14 yards into the end zone. Gibson picked up the football and tried to get out of the end zone, but a host of Saints led by Isaiah Ratcliff for a safety. The lead was upped to 29-3. 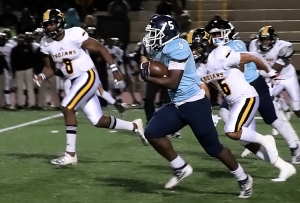 Cedar Grove’s Chavon Wright (5) gets way for a 45-yard gain against the Peach County defense. (Photo by Mark Brock)

Following the free kick by Peach County, the Saints put together an 11-play, 58-yard drive that took 6:37 off the clock on the way to Langston White’s three-yard touchdown run with 1:59 to play. Caine hit the PAT for the final score of 36-3.

Peach County ran three plays that ran out the final 1:59 of the game.

Chavon Wright finished the night with 18 carries for 140 yards (121 yards in second half) to lead the Saints’ ground attack that piled up 235 yards and two touchdowns in the game.

After allowing 188 yards in offense on 34 plays in the first, the Saints defense allowed just 11 plays while holding the Trojans to minus-two yards in the second half.

Cedar Grove now advances to the Class 3A semifinals to host the Greater Atlanta Christian Spartans (12-1) who rallied late to upend Hart County 17-16 to advance. The game is tentatively set for next Friday at Godfrey Stadium.