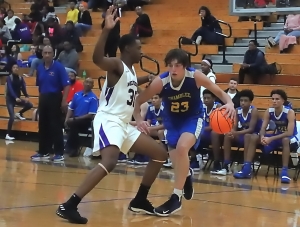 Miller Grove’s Michael Lewis (30) tries to cut off Chamblee’s Will Mepham (23) as he goes baseline during Miller Grove’s win on Tuesday. (Photo by Mark Brock)

The Miller Grove Wolverines picked up their first win of the season with a 67-29 win over the Chamblee Bulldogs to complete a Region 5-5A sweep at Miller Grove on Tuesday night.

Zyair Greene jumped started the Wolverines (1-1) as he went coast-to-coast after grabbing a defensive rebound to start an 11-0 run by Miller Grove to start the game.

Shomik Shahjahan drove for one basket and sank a deep three pointer from the top of the key as the lead quickly expanded to 7-0. Jamarcus Glover and Tyriek Boyd hit baskets to make it 11-0 with 2:53 to play in the first quarter.

Julius Coleman hit a three from the right wing and Njogu Bah had a steal and dunk as the Wolverines took a 16-6 lead into the second quarter.

Shahjahan and Coleman both hit two three-pointers in the second quarter and Greene completed a three-point play to send the Wolverines into the half up 31-11.

Greene opened the second half with three consecutive baskets to extend the lead to 37-13. Chamblee’s Iam Irving hit a basket with 12 seconds left in the third period to give the Bulldogs just their second basket of the quarter to trail 43-15 with one quarter to play.

Boyd had a four-point play on a three-pointer plus one and followed on the next trip down with another three as the lead continued to build at 58-21 with 3:31 to play.

Bryson Flemming had a pair of short jumpers in the lane in the final 1:10 for the Bulldogs as they fell to 0-3 on the season.

Shahjahan finished with a game-high 13 points and was joined in double figures by teammates Zyair Greene and Tyreik Boyd with 11 points each. Michael Lewis finished with 11 rebounds to lead the Wolverines on the boards.

Jeremiah Brown had a team-high seven points to lead the Bulldogs and Iam Irving finished with four points and six rebounds.

(G) Miller Grove 58, Chamblee 8
Four Miller Grove Lady Wolverines scored in double figures on the way to a 58-8 victory over the Chamblee Lady Bulldogs in the opener at Miller Grove on Tuesday.

Jalina Robinson (14 points, 8 rebounds) and Trinity Coxman (14 points, 7 rebounds) were two of six Lady Wolverines (1-2) to score in the opening period on the way to an 11-2 advantage heading into the second quarter.

Coxman and Jaylen Clark (10 points, 11 rebounds) both had four points in the second quarter to lead the way to a 25-6 halftime lead. Lily McCord, Kristina Perez and Cydney Bowe all had two points in the first half.

Robinson and Coxman each hit for four points in the third period as Miller Grove outscored Chamblee 17-2 in the period to go up 42-8. McCord’s offensive put back was the only basket for the Lady Bulldogs (0-4) in the third quarter.

Eight points from Robinson and four more from Coxman in the fourth quarter finished off the game.

Lily McCord finished with four points and six rebounds to lead Chamblee in the game.