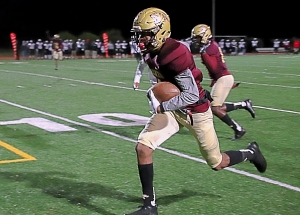 Tucker’s Isaiah Dunson returns an interception 18 yards for a touchdown to open the scoring in Tucker’s 34-6 win over Mt. Zion on Friday. (Photo by Mark Brock)

Defense and special teams led the way as the Tucker Tigers rolled to a 34-6 win over Region 4-6A foes Mt. Zion Bulldogs at Adams Stadium on Friday night.

The defense made the first big play of the night on the opening possession of the game when Tucker cornerback Isaiah Dunson (Florida State commit) stepped in front of a Ty Rogers pass and returned it 18 yards for the first score of the night just one minute and 12 seconds into the game. Kyle Wright added the PAT for the first of 10 points for him on the night.

Just over a minute later Tucker’s Isaiah Raheem hauled in an interception of his and returned it 41 yards to the Bulldogs’ 11-yard line. The Bulldogs defense stiffened and Wright came on to make it 10-0 in favor of the Tigers on a 24-yard field goal with 7:43 left in the first quarter.

Mt. Zion’s next possession ended with a 30-yard punt from their own 11 to give Tucker the football at the Bulldogs’ 41. Dunson set up the scoring play with a 12-yard run on an end around to the Bulldogs’ 23 on a second and four play.

On following play quarterback Myles Crawley dropped back and hit Dunson on a screen pass in the middle of the field. Dunson turned up field and zig-zagged through several Bulldog defenders on the way to a 23-yard touchdown. Wright’s second PAT of the night made it 17-0 with 4:42 left in the first quarter. 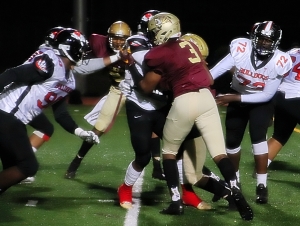 Mt. Zion punted with just of 20 seconds to play in the first quarter and Tucker’s Travis Davis got free to block the punt that traveled just three yards up field before going out of bounds at the Bulldogs’ 27.

Facing third and 13 at the Bulldogs’ 30 Crawley dropped back and threw to the end zone where Albert Montgomery hauled in the pass above a defender for the touchdown. Wright was good again on the PAT to make it 24-0 with 11:45 left in the first half.

Rogers used his arm to drive the Bulldogs to an early fourth quarter touchdown as hit six passes for 51 yards to set up his one-yard sneak into the end zone. A two-point pass was intercepted in the end zone and Tucker held a 27-6 lead with 10:19 to play.

The Tigers answered the score on its next possession driving 52 yards in 10 plays ending in a Quarius Smith one-yard touchdown run with 6:16 to play in the game. The drive was keyed by a fourth down and 15, 27-yard middle screen pass from Crawley to Dunson who got tripped up three yards shy of his third touchdown. Wright’s fourth PAT made the final margin of 34-6.

Dunson finished with four receptions for 115 yards and a touchdown to go with the interception return for a score to lead the Tigers. Crawley threw for 168 yards and two touchdowns.

Stephenson 26, Lovejoy 14
Senior running back Ryan Ingram scored three touchdowns to lead the Stephenson Jaguars to a 26-14 win over the Lovejoy Wildcats at Twelve Oaks Stadium on Friday night.

Lovejoy’s only score of the night came on the opening kickoff as the Wildcats returned the kick for the touchdown. Stephenson answered with 26 unanswered points beginning with an Ingram 48-yard touchdown run to pull the Jaguars within 7-6 with nine minutes left in the first quarter.

Deondre Jackson’s 12-yard touchdown in the second quarter gave the Jaguars the lead for good at 13-7. Ingram would extend the lead with eight minutes left in the third quarter with a four-yard touchdown run to make it 19-7.

Joseph Jackson completed the scoring as he connected with Ingram on a 33-yard passing touchdown to make it 26-7 as Emmanuel Rios hit the second of his two PATs.

Ingram finished the night with 185 yards rushing and two touchdowns on 30 carries to go with the receiving touchdown. Janir Wade had six tackles, 2 for a loss, including a sack, and Tommy Smith had 11 tackles to lead the Jaguars’ defense.

Flukers three touchdowns came on 11 carries for 68 yards and Jeremy Cain had a 56-yard touchdown run as three Lions rushed for over 60 yards in the game. Cain finished with 8 carries for 77 yards and Caleb Bailey carried eight times for 70 yards. Cam Fearn added another rushing touchdown.

The win coupled with Stephenson’s win over Lovejoy assured the Lions (7-2, 5-2) of their first playoff berth since 2013. A key region game against Morrow (5-4, 5-2) will decided if the Lions are a three or four seed heading into the Class 6A state playoffs.

Southwest DeKalb built a 34-0 lead before the Rams put up a touchdown in the final minute to get on the board. Mekhi Gilstrap had two touchdowns to lead the Panthers and Seoul Newton added another on the ground. Quarterback Rion White had a rushing touchdown and threw another to Roberty Grady.