Cedar Grove, Champion Advance to Trail to the Title Championship 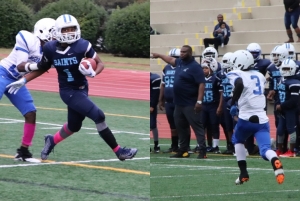 The DeKalb Trail to the Title Middle School Football Championship is set as undefeated Cedar Grove and Champion advanced to the finals with wins on Saturday at Godfrey Stadium.

Cedar Grove (8-0) was the first to punch their ticket to the finals with a hard-fought defensive 8-6 victory over the Stephenson Jaguars (5-3) in the opening semifinal at Godfrey.

The Saints struck early following the opening kickoff as they recovered the free ball at the Stephenson 34 to set up their only score of the game.

A penalty had the Saints in a first and 24 at the 37 when Demarcus Smith broke free around the left end and sprinted to the end zone just ahead of a Stephenson defender for the touchdown with 6:31 left in the first quarter. Boden Walker ran in the two-point conversion for Cedar Grove to make it 8-0.

After a pair of bad snaps put the Jaguars in a fourth and 48 at their own five-yard line, the Saints ended up with great field position again at the Stephenson 37.

Cedar Grove drove to the Stephenson two-yard line, but the Jaguars defense forced a turnover on downs thanks in part to Carson Wilson and Semario Jones who teamed up for a tackle in the Saints backfield to force a fourth down and goal at the five. A pass by Cedar Grove only gained two-yards.

Stephenson took over on their own three-yard line but with 1:14 left Cedar Grove’s Lamaze Williams intercepted a pass to set the Saints up at the Stephenson 26.

A facemask penalty on Stephenson put the Saints at the 13. With under 30 seconds to play, the Saints went to the air, but a screen to the wide receiver was tipped and Stephenson’s Tyrone Etienne intercepted and returned it 95 yards for a touchdown with 16.3 seconds to play in the first half. The two-point pass was incomplete, but Stephenson had the momentum going into the half down just 8-6.

The second half was all defense as the two teams had just one first down in the second half. Cedar Grove ran for a first down on its second possession of the period, but Etienne picked off his second pass of the game to end any threat.

Stephenson went for a fourth down with about 5:30 left in the game with a fake punt/pass that came up three-yards short.

Cedar Grove took over with 5:24 to play and ran out the clock by driving to the Stephenson 14 to seal the win.

The Saints held Stephenson to just seven yards of offense in the game (-17 rushing), but managed just 132 yards of offense with Demarcus Smith accounting for 100 yards rushing on 12 carries and the touchdown.

Cedar Grove will make its fourth trip to the championship game having gone undefeated two times while winning back-to-back titles in 2014 and 2014. 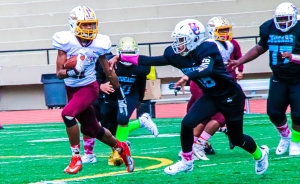 Champion 24, Henderson 6
The Champion Chargers kept their historic undefeated season alive with a 24-6 semifinal win over the Henderson Cougars in the second game at Godfrey Stadium on Saturday.

Champion (8-0) opened the game driving 66 yards to take the lead for good on a four-yard touchdown run by Milton Smith. Smith added the two-point run for the 8-0 lead with 5:34 left in the first quarter. Channing Henderson’s 44-yard run to the Henderson 14 was a key play in the drive.

Henderson (7-1) could not get a first down and punted on its first possession. Champion took over on the Henderson 42 and drove down for a second score in the first quarter on an Arrington Watkins three-yard touchdown run. Watkins added the two-point conversion to make it 16-0 heading into the second quarter. Milton Smith’s 19-yard run to the Henderson three-yard line set up the Watkins run.

The Cougars got their first big break of the game with 5:03 left in the first half as Derrick Roseberry Jr. recovered a Champion fumble at the Chargers’ 23-yard line. Henderson’s Allen Holomon Jr. capitalized on the mistake as the broke free on a 23-yard run to the end zone to trim the lead to 8-6 with 4:42 left in the half.

Champion answered right back driving 75 yards in nine plays all on the ground and capped off by Randy Smith’s 11-yard run into the end zone. Milton Smith tacked on the two-point run to make it 24-6.

Henderson looked to answer right back when Hollomon got loose again and raced 54 yards for a touchdown, but a holding penalty nullified the run and the teams went to the half with Champion up 24-6.

Neither team could get much going in the second half as the Cougars managed just two first downs in the third quarter and Champion one.

Champion forced a punt early in the fourth quarter to take possession of the football on their own 35 with 6:07 to play. The Chargers marched 45 yards to the as far as the Henderson 31 to run out the final six minutes.

Henderson’s historic season came to an end with the loss. The Cougars won seven games for the first time and earned a first-ever semifinal bid. Hollomon finished with 20 carries for 69 yards and touchdown to lead Henderson.

Champion (8-0) goes for its first championship title on Saturday at 11:00 am at Adams Stadium against two-time Trail to the Title champ Cedar Grove (8-0) in the sixth matchup of undefeated teams in the past seven seasons.