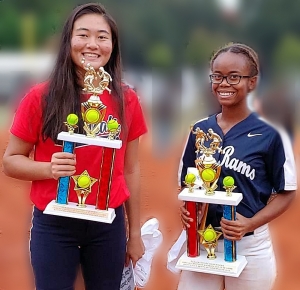 Two runs aided by errors crossed the plate in the second inning to put the Red team up 2-0. Two more runs came in the top of the third inning as Dunwoody’s Zuri Wells hit one off the top of the left field fence for a two-run double scoring Miller Grove’s Latiya Lee (single) and Julieyana Ferguson (walk) to push the advantage to 4-0.

Michaela Evans closed the gap to 4-1 for the Blue seniors with her RBI single up the middle to play Arabia Mountain teammate Miya Lewis who had doubled and stole third to lead off the inning.

The Red seniors added a solo run in the fourth on Lee’s RBI single and two more in the fifth on a RBI single by Miller Grove’s Dominique Coney and RBI double by Lithonia’s Samiyyah Huckabee to push the lead out to 7-1.

Blue starting pitcher Michaela Evans who went seven innings in the loss combined with Chamblee’s Mary Axelson pitching two scoreless innings each over the final four to keep the Blue within striking distance. The pair allowed just four base runners and two hits along the way.

The deficit was closed to 7-4 in the bottom of the sixth as the Blue seniors began to climb back into the game. Kimbreanna Peak reached on an error and stole second to get the inning going. A wild pitch on ball four to Arabia Mountain’s Aubri Gray allowed Peak to cross with the first of the three runs.

Decatur’s Camilla Schneider grounded to the right side to score Gray and reached on an error. Evans would pick up her second RBI single of the game with a hit to left field to score Schneider who had stolen second base. 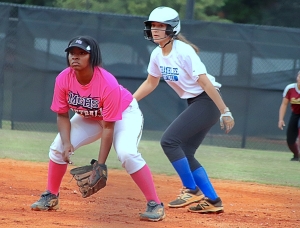 Miller Grove’s Aniyah Zackery (left) is ready at first base while Chamblee’s Grace Fazzone (right) gets a lead. (Photo by Mark Brock)

Lakeside’s Regan Greene singled and stole second to put another runner in scoring position for the Blue. Emily Miranda of Decatur grounded out to score Greene before Red pitcher Huckabee coaxed a fly ball to center for the final out of the inning.

Axelson set the Red down in order in the top of the ninth to keep the Blue within striking distance with three outs remaining.

Huckabee was able to shut the door by keeping the Blue to a three-up and three-down inning in the bottom of the ninth to secure the win for the Red seniors.

Michaela Evans was 2-4 with two RBIs while pitching seven innings to lead the Blue and claim Most Valuable Player honors.

See links below for 2019 box score and updated All-Star records: