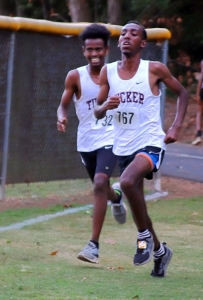 After storms cancelled the Week 4 meet at Arabia Mountain DeKalb teams sprang back into running form in Week 5 at Druid Hills Middle School course this week.

The first girls’ varsity race title went to Dunwoody with the girls scoring a perfect mark of 15 in out running Martin Luther King Jr. (60) and Clarkston (64).

Clarkston’s Malik Colette broke up a Dunwoody sweep of the Top 10 as she finished sixth in 24:31.00.

Tucker and Clarkston battled in a close race in boys’ opening action with Tucker nipping Clarkston 44-47. Chamblee (68), M.L. King (71) and Dunwoody (105) rounded out the team scoring.

Sophomore Tucker teammates Abedelemeji Kerebo (19:24.30) and Yordanos Ephram (19:33.70) took seventh and eighth to give the Tigers a big lead.

Dejen Abtie (20:36.20), a freshman, gave Clarkston its fifth finisher by coming in 14th and the Angoras team total of 47 with Tucker holding at 18 and waiting on a fifth runner.

Junior Jarvis Wynn (22:19.80) would be the fifth Tucker finisher as he came in 29th. Given that score the two teams would be tied atop the scoring, but three runners from Stone Mountain, which did not score as a team, came in ahead of him to elevate his score to 26. 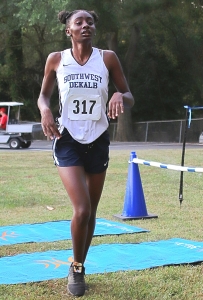 Southwest DeKalb’s Angelee Mitchell was the first girl to cross the finish line in the second girls’ varsity race of the day. (Photo by Mark Brock)

Southwest DeKalb was the only team qualifier in the girls’ second varsity race of the day taking six of the Top 8 spots to pick up a perfect score of 15.

Southwest DeKalb outdueled Towers 25-36 for the title in the boys’ second varsity race. Arabia Mountain (76) and Lithonia (104) rounded out the team scoring.

JUNIOR VARSITY
The third junior varsity race of the season in DeKalb was also held at Druid Hills Middle this week with the Lakeside Lady Vikings and Dunwoody Wildcats taking the team titles.
The Lady Vikings squeezed past Dunwoody 30-33 for the win despite Dunwoody taking three of the Top 4 spots led by eighth grader Claire Shelton (13:28.30) who took top honors in the race. Lakeside, which had four of the Top 10, was led by sophomore Ella Steed (16:51.10) in third.

See links below for full results of Week 5 races: