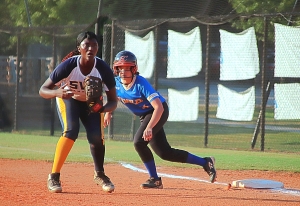 Southwest DeKalb batters went deep three times and held off a late Chamblee rally for a key 8-6 Region 5-5A win at Chamblee on Thursday.

Chamblee answered with three runs in the bottom of the fifth to cut the lead in half at 8-4. Ansley Mepham scorched a clutch two-run double to down the third baseline and Mary Axelson followed by driving in Mepham with a RBI single to center to close the gap.

Both teams went pretty quietly in the sixth inning and Southwest DeKalb left Michelle Tanks stranded after her two-out double in the top of the seventh leaving the Lady Bulldogs an opening heading into their final at bat.

Mepham came up big for Chamblee as she drilled a two-run homer over the left field fence to close the gap to 8-6. Mary 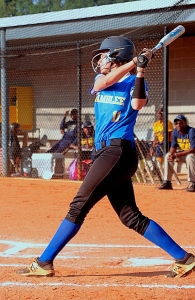 Chamblee’s Ansley Mepham had a big day at the plate with a two-run double and a two-run homer in her team’s tough 8-6 loss to Southwest DeKalb. (Photo by Mark Brock)

Axelson doubled to deep left field and following an error the Lady Bulldogs had the tying runners at second and third.

Southwest DeKalb pitcher Alexis Dover closed the door with her seventh strikeout of the game to preserve the win.

The Panthers jumped in front in the top of the first inning behind a two-run homer by Genia Hall. Charmya Acie followed with a double and scored as a two-out error aided the three-run first for Southwest DeKalb.

Acie added the second homer of the game for Southwest DeKalb in the top of the third inning with a solo shot to left with one out to make it a 4-0 game.

Emily Katz singled and later scored on an error to get Chamblee on the board in the third inning. Chamblee took advantage of a pair of errors to get runners to first and third with two out, but Dover got a fly ball to deep center to end the inning.

Mepham finished the day 2-4 with a double, homerun and 4 RBI to lead Chamblee. Mary Axelson also went 2-4 with a double and RBI. Lily McCord took just her second loss on the season against eight wins while striking out 10 over her seven innings. Chamblee fell to 14-4 overall and 7-1 in region play.