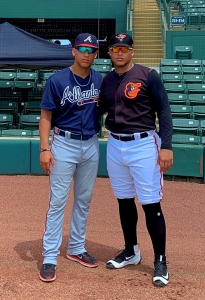 It was a winding road for the sons of Chamblee boys’ head basketball coach Caesar Burgess  and his wife, Brenda, as both attended three colleges before signing their contracts this summer.

The pair were both football and baseball stars for the Bulldogs before graduating in 2015 and heading to Spartanburg Methodist College.

Christopher (6-1, 210) transferred to Gordon State and then on to Middle Georgia State this past year. He finished the 2019 season with 25 RBIs, a .217 batting average, .410 on base percentage and .340 slugging percentage in 39 games. He also hit three homeruns and from his position as catcher threw out 25 of 47 baserunners attempting to steal.

He signed with the Baltimore Orioles on June 22 and headed to Florida for his first professional action in Gulf Coast Rookie League.

“It was a dream come true and to come to such a great organization with a great history is just a blessing from God,” said Chris. “I remember playing in Perfect Game Tournaments down here and now I am playing in these stadiums where the big leaguers come for spring training.”

The final weekend of the 2019 regular season was cancelled by the GCL due to the approaching hurricane.

Christopher was batting .286 (16-56) with 2 double, 2 homeruns and 11 RBI with 22 game appearances for the GCL Orioles. He has 17 starts at catcher with a .959 fielding percentage and also made 2 appearances at DH and one at shortstop.

One of his biggest highlights so far was to hit his first homerun against the Red Sox in Sarasota. “I can remember every step around the bases,” said Chris.

Chris and his Orioles teammates are preparing for the playoffs against the Twins after capturing the South Division of the GCL.

“I’m looking forward to the playoffs and a chance to win a ring,” Chris said.

Brenton (6-1, 201) finished his 2019 season at Georgia Gwinnett College batting .347 with 6 homers, 18 doubles and scored 47 runs as he was named First Team All-Association of Independent Institutions selection. Georgia Gwinnett won the A.I.I title and advanced to the semifinal round of the Avista NAIA World Series.

He was drafted in the 2016 (Texas, 40th round) and 2017 (New York Yankees (38th round) MLB Amateur Draft. After a workout with the Braves in Rome Atlanta sent him to the Sunbelt Summer League. He performed well and the Braves signed him on July 12. He joined his brother in Florida playing for the GCL Braves in the same division as Christopher’s Orioles.

“It was a dream growing up as a little kid watching the Braves to one day put that Braves across my chest,” said Brent. “Now here I am living that dream and hopefully will make it back to my hometown to become like some of those heroes I watched growing up.”

Brenton was hitting 96 miles per hour on his fastball and the Braves wanted to try him on the mound despite his limited time throwing. In a recent two inning stint against the GCL Pirates Burgess had three strikeouts, two groundouts and one fly-out as he sat down six consecutive batters.

The Chamblee product finished his season this week as the Braves came in fifth overall in the South Division of the GCL behind his brother’s Orioles.

Brenton finished the season with eight appearances on the mound for the Braves with a 1.49 earned run average, a 1-0 record with one save in 12.1 innings. His win was over the Pirates with two innings work throwing just 18 pitches (14 strikes), three strikeouts, 1 walk and 3 hits.

“My first win was a thrill,” said Brenton. “We were losing when I came in in the seventh inning and I shut them out for two innings as we rallied to get the win.”

Playing together was always a thrill for the two, but playing against each other in Florida was another step in their journey.

Chris was also thrilled to get to play professional baseball against his twin.

“The things we’ve shared over the years and the obstacles we’ve overcome to get here makes it a wonderful experience to get to play against each other,” said Chris. “Seeing him across that field and getting to take a photo together as pros, I just can’t express what it was like.”

Maybe one day in the future they will get to take a photo as opposing players in the Majors to add to their amazing trip through life.