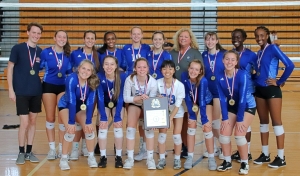 The defending champions Lady Bulldogs had to rally from a first game loss (23-25) to their rivals Dunwoody Lady Wildcats to win the next two games, 25-12 and 15-9 to win the title.

Dunwoody had taken the opener on a nice shot by Liz Duke with Chamblee serving to try and knot the match at 24-24. Duke’s shot to the open court put the Lady Wildcats (5-1) up one game to none.

Debbie Kitzler’s block at the net gave Chamblee a 14-9 lead in the second game and forced Dunwoody to call timeout as a 5-5 game had turned into a five-point deficit.

Watson and Ava Grace Samford combined for a block as the Lady Bulldogs (6-0) jumped to a 10-2 advantage in the deciding third game of the match on the way to a match clinching 15-9 victory. 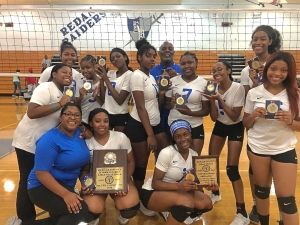 Columbia finished 1-2 in pool play, but rallied for three consecutive wins in the Silver Bracket to take the top spot in the bracket.

The two Area 5-5A squads had to go three games to decide the winner after Lithonia won the opener 25-16. Columbia bounced back with a 25-20 win in the second game and the squeezed out a 15-12 win in the tiebreaker.