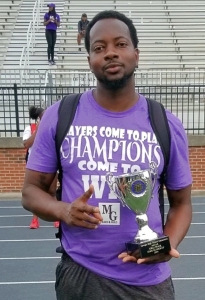 Keddo’s Lady Wolverines finished as the runner-up in the Class 5A State Track Meet in May while also taking home the Region 5-5A and DCSD County titles in 2019.

Over 11 years Keddo has built a strong girls’ track program at Miller Grove finishing no lower than third in the DCSD County Championships six times including county titles the past three seasons and in 2014. His squads finished second in 2013 and third in 2015.

Keddo owns one state title as his team captured the 2014 Class 5A championship behind four-time state champion Tiffany Flynn who captured the 100 meter hurdles and the long jump that season to go with the long jump and triple jump titles in 2013.

Sonni Austin who won three consecutive state titles in the 300 meter hurdles from 2007-2009 was also coached by Keddo.