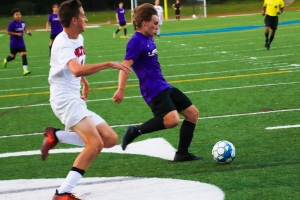 Lakeside’s Ryan Dunbar (right) gets past a defender on the way to what would be the game-winning goal in Lakesides 2-1 Class 7A semifinal victory over the Milton Eagles. (Photo by Mark Brock)

Ryan Dunbar’s goal with 2:56 left in the first half proved to be the game winner in the No. 3 ranked Lakeside Vikings’ 2-1 win over Milton in the Class 7A State Playoffs semifinals at Adams Stadium on Tuesday night.

The game had been tied 1-1 since Milton scored with 23:40 when Dunbar outraced a Milton defender to the ball on a long pass. Dunbar got inside the defender and drove to the goal. A shot towards the left corner past the Milton goalie bounced off another defender and into the goal to give Lakeside the 2-1 lead.

Lakeside had a direct kick after foul, but the shot went high off the cross bar with 2:04 left in the half and the two teams would go to the break with the Vikings (18-1-3) holding the 2-1 advantage.

Lakeside goalie Andrew Seybolt, who gave up his first goal of the playoffs in the first half, came up with a big save with 30:34 to play to keep the Vikings ahead.

Both teams would miss opportunities throughout the second half as the two goalies and defenses continued to turn away their opponents.

A Milton player was injured in a collision with Seybolt out in front of the goal with 4:35 to play and a drop ball was played after the game resumed. Lakeside managed to the drop ball out of their zone and began to run down the clock.

The Vikings kept the ball in Milton’s half of the field over the final two minutes to secure their first trip to the state title game since 2008 and 10th overall. 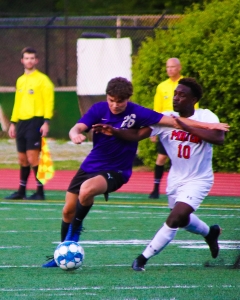 Lakeside’s Reid Doering (26) fights past a Milton defender during the Vikings Class 7A semifinal victory. (Photo by Mark Brock)

Maverick Ruiz gave Lakeside the early lead just 2:46 into the first half as he got a shot through heavy traffic in front of the goal to put the Vikings up 1-0.

Lakeside now has a 69-30-1 record overall in the state playoffs and will go for No. 70 as they face No. 1 ranked and defending state champ Lambert (20-1-0) which survived and overtime and penalty kicks (5-3) to defeat Meadowcreek 2-1 to advance to the finals.

The championship is set for Saturday at 7:30 pm at McEachern High School. Lakeside will serve as the home team in the game.

Lakeside last won a state title, its seventh, in 2008 with a 3-1 penalty kicks win over Southeast Whitfield with Alec Kann, now with Atlanta United, in goal for the penalty period. The Vikings hit a big milestone this season back on March 12 with a 4-1 win over Cedar Shoals for the program’s 600th win (now 614-160-52).

Class 4A
The Druid Hills Red Devils came close to joining Lakeside in a state final pushing No. 1 ranked Upson-Lee to the limit in a penalty kick loss on Tuesday night at Upson-Lee.

The two teams played 80 minutes of regulation to a 0-0 tie and remained knotted at 0-0 following the 15-minute overtime period.

Upson-Lee puled out the win 5-4 in the penalty kicks to end the Red Devils’ season at 11-9-1 overall.