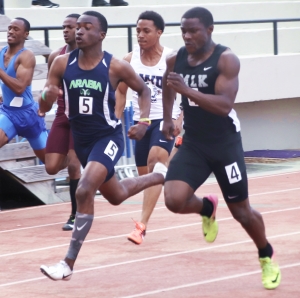 Arabia Mountain’s Jordan Barrow (left) took gold in the 200m dash in Class 5A while Martin Luther King’s Jhivon Wilson took a silver in the Class 6A 100m dash and a bronze in the 200m dash. (Photo by Mark Brock)

Junior Jordan Barrow scored 20 of the 21 points for the Arabia Mountain Rams to lead his squad into a tie for 10th in the team standings.

Southwest DeKalb picked up 20 points, finishing just one point behind Arabia Mountain and New Manchester, to come in with a tie for 12th along with McIntosh. The Panthers performance was led by the 4x400m relay team’s silver medal performance with a time of 3:14.71.

Miller Grove came in just three points out of 10th with a total of 18 team points to finish in a tie for 14th with Buford. Senior Shawn Chuck Collins grabbed a silver medal in the 400m dash (47.08). Fourth place finishes in the 110m hurdles by junior Darryl Burton III (14.55) and in the 4x400m relay (3:16.87) also contributed to the Wolverines’ finish.

Class 3A
Four-time defending state champion Cedar Grove came up short in a bid for a fifth consecutive state title in Class 3A finishing 10th with Towers nipping at their heels in a tie for 11th to lead the DeKalb contingent in Albany.

Cedar Grove collected three medals on the way to 26 points led by senior hurdler Dimitri Cooper who picked up a silver medal in the 300m hurdles (39.69) and bronze in the 110m hurdles (14.78). The 4x400m relay team also collected a silver medal with its 3:24.67 clocking in the event.

Towers run to its tie for 11th with North Hall put together 24 points led by junior Shun Taylor and Elijah Hobson’s two-three finish in the long jump. Taylor took the first of his two silver medals in the meet with a leap of 22-06.00 and Hobson went 22-02.50 for the bronze.

Taylor picked up his second silver of the meet with his 44-09.75 distance in the triple jump. Junior Quandarius Patrick added two points to the Titan’s total with his seventh place finish in the 110m hurdles (15.90).

Redan rounded out the DeKalb group in Class 3A with a sixth place finish in the 400m dash (51.46) to account for the Raiders three points and tie for 30th in the team standings.

Class 6A
Four DeKalb teams got into the team standings in the Class 6A state meet at Carrollton led by Martin Luther King Jr.’s 22nd place finish.

Stephenson tied for 27th with Northgate and Allatoona with eight points in the meet. The 4x400m relay teams finished fifth (3:22.50) to lead the way. Senior Felipe Bembry was seventh in the 110m hurdles (14.91) and sophomore Dorian Helm was seventh in the 300m hurdles (40.43) to aid the Jaguars’ cause.

Dunwoody and Tucker tied for 34th along with Gainesville, River Ridge, Dalton and Winder-Barrow with three points. Dunwoody’s points came from Alon Rogow’s sixth place in the pole vault (13-06.00) and Tucker’s 4x400m relay team was sixth (3:22.97) to account for the Tigers’ points.

Class 4A
In other action at Albany, Druid Hill’s Carter Rathur came up just short of a medal with his fourth place finish in the Class 4A 3200m run (9:43.48). Rathur’s five points put the Red Devils in a tie for 28th with Burke County.

See link below for the full DCSD 2019 State Track results: