Lady Wildcats Climb to Top of Class 6A Track 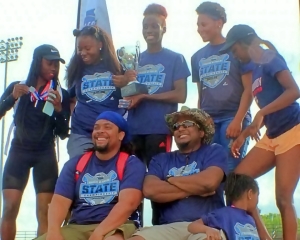 The Dunwoody Lady Wildcats brought home the program’s third state track championship trophy on Saturday as they held off Cambridge 50-47.50 to capture the Class 6A girls’ state championship at Carrollton.

Dunwoody put up a strong 36 points in the field events led by sophomore Janae Profit, junior Ariel Lawrence and senior Jahvene Walder for a 10.5-point lead over Cambridge and 11 over Forest Park after eight events had been scored as the teams headed to the track finals on Saturday.

Dunwoody’s win extended the DeKalb consecutive state track title streak (boys and girls) to 13 years (2007-2019). It is the 11th girls’ title in that span coupled with eight by the boys to give the district 19 total during the run.

The Southwest DeKalb girls’ and Cedar Grove boys’ both lead the way with four titles during the streak. Southwest won three consecutive from 2007-2009 and again in 2011. Cedar Grove’s four-year run atop of the Class 3A (2015-2018) ended this year.

In other Class 6A girls’ results, Tucker finished 19th with 13 points and Martin Luther King Jr. was 37th with three. 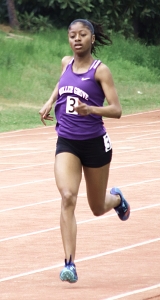 Class 5A Girls
Miller Grove gave it a run in the Class 5A girls’ meet at Carrollton as the Lady Wolverines finished as the runners-up to Buford 43-72.

Miller Grove senior Emoni Coleman became a four-time state champion winning her third consecutive 800m run gold with a time of 2:15.86 and finished with a total of 18 points as she was the runner-up in the 1600m run (5:08.12) which she won a year ago.

Arabia Mountain finished 14th in the team standings (19.50) behind the bronze medal performance in the high jump (5-02.00) by Riley Johnson.

Class 3A Girls
Senior Aubrey Guyden helped lead the Cedar Grove Lady Saints to a fourth overall finish in the Class 3A girls’ state meet at Albany on Saturday.

Stone Mountain freshman Serenity Harry helped the Lady Pirates to a tie for 17th in the team standings with a silver medal finish in the 100m dash (12.35) and seventh in the 200m dash (26.30).

Towers finished with four points good for a tie for 22nd and Redan was in a tie for 32nd with two.