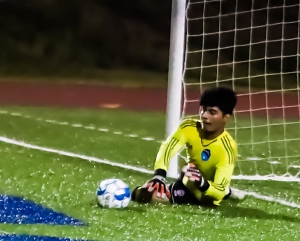 Ruben Angeles had been there as a freshman with his team facing elimination in the state playoffs as they went to penalty kicks.

It was no different in his junior year as he once again came up with a big save to send his Druid Hills team into the Class 4A semifinals with a 4-2 penalty kick win over the Marist War Eagles at Hallford Stadium on Wednesday night.

Druid Hills and Marist fought to a 1-1 tie after 80 minutes of regulation and the 15-minute overtime to head to the penalty kick tiebreaker.

Marist’s Santi Bandulich, who scored the War Eagles only goal with 25:11 left in regulation, hit the first shot against Angeles as the first shooter in the 1-2-2 format.

Druid Hills’ Aung Lay and Izaak Clarke both hit their penalty kicks to put the Red Devils up 2-1, but Marist’s Shaun Gutmann evented it at 2-2 as he got his shot past Angeles to bring teammate Joseph Miller up to face Angeles.

Miller went low and to Angeles’ left only to have the diving Angeles knock the shot down to keep the score at 2-2.

Dani Bibiano gave Druid Hills a 3-2 lead as he put his shot past a diving Miller. Menkaseh Tokpa was up next and he too beat Miller pushing the lead to 4-2 with Marist having the next two shots.

Payne Gunckel tried to go high to Angeles left needing a goal to keep the War Eagles in the game. His shot went wide right and Druid Hills had its first Final Four appearance since its 2017 state runner-up finish. 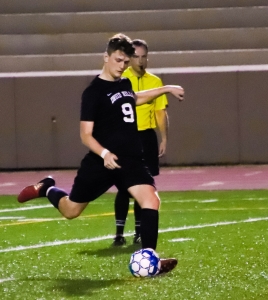 Druid Hills Izaak Clarke was putting his toe to leather to hit one of four penalty kicks for Druid Hills. (Photo by Mark Brock)

Bandulich gave Marist what was looking to be the winning goal when he picked off a deflection to score with 25:11 left in the game.

Druid Hills tied the game 11 minutes later as the offense upped its play a notch with Tokpa getting a pass through to Evan Schroeder to knot the game at 1-1 with 14:10 to play.

Three more saves by Angeles and two by Miller in the overtime sent the game into the penalty kick tiebreaker.

The Red Devils (11-8-1) fought through a tough early schedule and the young squad has turned it up late in the season after getting off to its slow start of 2-4-1 to bounce back by winning 9 of its last 13 including four of the last 5.

Another big test looms as they travel to No. 1 ranked Upson-Lee (18-0-1) which defeated No. 9 Blessed Trinity 3-0 on Wednesday to advance. The only blemish on Upson-Lee’s season was a 2-2 tie with Fayette County.

Class 7A
The No. 3 ranked Lakeside Vikings won another close on as they take down Kennesaw Mountain 1-0 at Adams Stadium on Wednesday to advance to the Class 7A Final Four.

The Vikings scored in the first half and the defense and goalie Andrew Seybolt kept Kennesaw off the scoreboard for the 1-0 shutout victory.

It had been nine seasons since the Vikings reached the state semifinals.