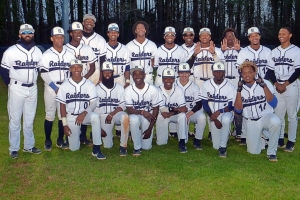 The Redan Raiders take on No. 9 Fannin County in the Sweet 16 of the Class 3A baseball playoffs beginning today (Wednesday).

A pair of DeKalb baseball programs are vying for a spot in their respective Elite 8 state playoffs with best-of-three series.

Redan (21-11) opens up first after the Class 3A playoff series against No. 9 ranked Fannin County (23-6) was moved up to today (Wednesday) with a 5:00 pm doubleheader in Blue Ridge due to expected bad weather. The if game is set for Thursday with a time to be announced.

The Raiders reached the Sweet 16 with a tough three-game road series at Morgan County last week. Redan dropped the series opener to Morgan County 12-11 after having a late lead, but bounced back to tie the series with a 6-5 win in 10 innings in the nightcap. The following day the Raiders jumped ahead 8-4 only to fall behind 10-9 before rallying and holding on for a 13-11 victory to get the series victory.

Fannin County swept its opening series with Haralson County 9-1 and 15-0 to reach the second round. 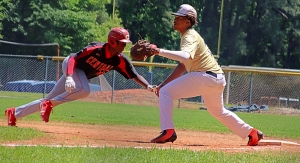 Southwest DeKalb first baseman Keion Neal (right) and his Panther teammates are vying to keep their postseason alive against No. 10 Riverwood on Thursday. (Photo by Mark Brock)

Class 5A
The Southwest DeKalb Panthers (18-4) broke a 41-year drought in state playoff competition with their first series victory since 1978 as they defeated Clarke Central 16-6 twice in their Class 5A series opening doubleheader to sweep and move on to the Sweet 16.

A second round host date with No. 10 ranked Riverwood (23-4) which had to go three games to defeat East Paulding and advance to the second round.

The doubleheader is set for a 2:00 pm start on Thursday (May 2) at Southwest DeKalb with the third game, if necessary, set for Friday at 5:00 pm.