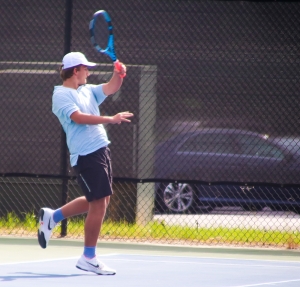 Chamblee’s Hap Howell clinched the Bulldogs trip to the Class 5A state title match with his 6-4, 6-3 win at No. 3 singles over Buford’s Luke Davidson. (Photo by Mark Brock)

Chamblee tennis has the opportunity to double on state titles on Saturday at the Rome Tennis Center at Berry College after taking care of business in semifinal action on Tuesday at the Sugar Creek Tennis Center.

The Bulldogs advanced with a 3-0 victory Buford to reach their first championship match since falling to St. Pius in 1999 after winning the program’s only state title in 1998.

Buford had won the regular season matchup between the two teams 3-2 by sweeping the singles matches back on March 7.

The Wolves took the first set at both No. 1 singles and No. 2 singles, but the Bulldogs were winning on both doubles’ courts.

The No. 2 doubles team of Chase Starks and Nevin Aresh remained undefeated at 5-0 with a 6-1, 6-0 win over Buford’s Cameron Tidwell and Caleb Williamson to give the Bulldogs the opening point of the match.

It went to 2-0 as the No. 1 doubles team of Carter DiFonzo and Bryce Starks (9-1) rolled to a 6-0, 6-2 victory over Kyle Ryczek and Todd Goehmann putting the Bulldogs in the driver’s seat as the No. 1 and No. 2 singles matches were in second set battles. 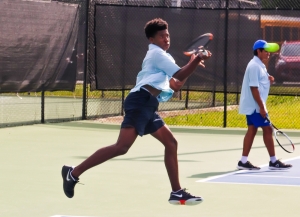 Chamblee’s Bryce Starks teamed up with Carter DiFonzo for a 6-0, 6-2 win at No. 1 doubles. (Photo by Mark Brock)

The big point was coming as Hap Howell was up a set at No. 3 singles with a 6-4 win in the opening set of his match with Buford’s Luke Davidson.

Howell jumped out to a 3-0 lead in the second and seemed to be cruising when Davidson made his move to pull even at 3-3 with three consecutive game wins. Howell responded with a tough win in the seventh game to regain a 4-3 lead with Davidson to serve.

Davidson’s serve was broken by Howell (9-8) to give the Bulldog a 5-3 lead with the opportunity to serve out the match. Howell fell behind early, but battled back to deuce before pulling out the win 6-3 to clinch the match and state finals berth for the Bulldogs (18-5).

Chamblee faces Grady in the Class 5A boys’ final at 1:30 pm at the Rome Tennis Center on Saturday, May 4 as the Bulldogs look for title No. 2 21 years after their first. Grady reached the championship with wins over Hiram (3-0), Loganville (3-0), Wayne County (3-0) and the semifinal win over Carrollton (3-1). 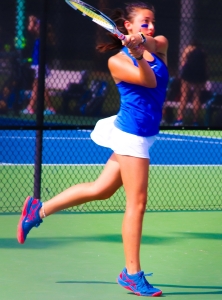 Chamblee’s Neena Katauskas battled back from a 2-0 second set deficit to close our the No. 1 singles point 6-2, 6-3 over Carrollton’s Sonya Ivashchenko. (Photo by Mark Brock)

The two-time defending champions Lady Bulldogs took a bit longer to finish off Carrollton by a score of 3-1 to advance to their third consecutive state final appearance.

Chamblee grabbed the lead 1-0 as sophomore Samantha McCrery and freshman Allison Lvovich ran their record to 6-0 by knocking off Carrollton’s Madison Webb and Maddie Rogers 6-2, 6-1 at No. 2 doubles to start the scoring.

The next match to finish was the No. 1 singles battle between Chamblee sophomore Neena Katauskas and Carrollton’s Sonya Ivashchenko. Katauskas won he first match 6-2, but fell behind 2-0 after Ivaschenko got a break and won serve.

Katauskas battled back to a 4-3 lead and finished it off with a break and serve to close out the match 6-3 to put Chamblee ahead 2-0.

Carrollton won the No. 3 singles point as Caitlann Avant defeated Lila David in straight sets to close the gap to 2-1 with battles going on at No. 2 singles and No. 1 doubles.

Chamblee’s Grace Pietkiewicz fell behind 5-2 in the first set to Carrollton’s Audrey Best before digging in and battling back to win the set 7-6 by winning 4 of the next five games at No. 2 singles.

At No. 1 doubles Chamblee’s Madison Trinh and Madeline Meer broke a 4-4 tie by winning the next two games to go up 1-0 in their match with Carrollton’s Katy Nixon and Christen Avant.

The Lady Bulldogs needed one win and Carrollton needed both to claim the spot in the Class 5A girls’ state championship on Saturday. 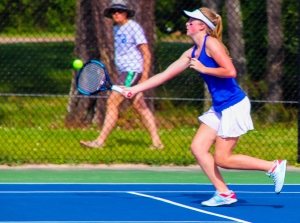 Chamblee’s Samantha McCrery teamed up with Allison Lvovich for a 6-2, 6-1 win over Carrollton’s Madison Webb and Maddie Rogers to get the Lady Bulldogs on the board first. (Photo by Mark Brock)

Both matches were in the hands of Chamblee leading 5-2 and needing one game to get their third consecutive trip to the state finals when Trinh and Meer (8-2) got a service break to win their match 6-2. Pietkiewicz was within a point of winning her match after the dramatic first set comeback when play was stopped after the clinching match.

Chamblee is now 22-1 on the season and have won nine matches in a row after losing 3-2 to Lovett which broke their 60-match winning streak dating back to the start of the 2017. The Lady Bulldogs are 69-1 over the past three seasons.

The Class 5A girls’ state finals will be a rematch of Chamblee’s thrilling 3-2 victory over Kell last year at Rome. Kell defeated Bainbridge 3-0 to advance into the rematch.

Class 6A Boys
The Dunwoody Wildcats will not make a return trip to the Class 6A boys’ title match as they fell in a tough 3-1 loss to Northview.

Northview won all three matchups with the Wildcats this season as Dunwoody wraps up another deep run into the state playoffs and finish 12-9 on the season.