Chamblee Teams Knock Off McIntosh to Reach 5A Final Four

Chamblee’s Andrew Pietkiewicz rallied to win the deciding match at No. 1 singles to put the Bulldogs into the Class 5A Final Four. (Photo by Mark Brock)

Clutch play on the tennis courts at Sugar Creek Tennis Club on Thursday pushed the Chamblee Lady Bulldogs and Bulldogs past their McIntosh opponents into the Class 5A tennis Final Four.

The Bulldogs had a thrilling end to their match leading 2-1 and having split sets at both No. 1 singles and No. 3 singles.

McIntosh scored the first point of the boys’ match as Jaran Rosenberg defeated Chamblee’s Eshaan Agrawal 6-0, 6-2 at No. 2 singles.

Chamblee came right back with wins at both doubles with Carter DiFonzo and Bryce Starks (8-1) winning at No. 1 6-2, 6-2 over McIntosh’s Alex Landa Dievz and Simon Mahler. Chase Starks and Nevin Aresh (4-0) rallied from down 1-4 in the first set to win 7-5 and then taking the second set 6-4 to win the No. 2 doubles point for the lead.

Meanwhile the No. 1 singles match between Chamblee freshman Andrew Pietkiewicz (10-4) and McIntosh’s Freddie Lawrence was heading to the third set after Lawrence bounced back from a 6-3 first set loss to win the second set 6-1.

The third set was 2-2 and the pair had five consecutive service breaks with Pietkiewicz breaking Lawrence to take a 5-4 lead to pull the Bulldogs within one game of clinching the match.

As the drama built up at No. 1, the No. 3 singles had split sets in consecutive tiebreakers with McIntosh’s Calib Claiborne winner the first set 7-6 and Chamblee’s Hap Howell rallying to take the second set 7-6.

A break in the action at No. 3 singles turned all the attention to the No. 1 singles match as Pietkiewicz was serving for the match, but trailing 15-30. He would win the next two points to take the advantage. He hit a service winner that Lawrence could not return cleanly for the match clinching point to send the Bulldogs to the Class 5A boys’ semifinals against Buford, a 3-1 winner over Statesboro.

The Final Four match with Buford will be a rematch of a regular season 3-2 loss by the Bulldogs (17-5). 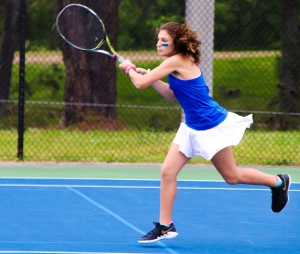 Chamblee’s Allison Lvovich and No. 2 doubles teammate Samantha McCrery won one of four points for the Lady Bulldogs in their win over McIntosh for a spot in the Class 5A Final Four. (Photo by Mark Brock)

Madeline Meer and Madison Trinh got the Lady Bulldogs on the board first with a quick 6-1, 6-0 win at No. 1 doubles over McIntosh’s Emma Toner and Elise Johnson.

McIntosh closed the gap with Kate Bickard’s 6-3, 6-2 win over Chamblee’s Lila David at No. 3 singles to cut the advantage to 2-1.

The first set of the No. 1 girls’ singles match between Chamblee’s Neena Katauskas and McIntosh’s Olivia Hooper went to a tiebreaker tied at 6-6. Katauskas won the tiebreak 7-0 to take the one set advantage. Katauskas (11-) would roll to a 6-1 win the second set to seal the match.

Samantha McCrery and Allison Lvovich won their first set 6-4 at No. 2 doubles, but dropped the second set 7-5 to force a third set in a match that had no bearing on the outcome. The pair closed out the 4-1 win with a 6-1 third set victory.

Chamblee (21-1), the two-time defending, moves into the Final Four to face Carrollton as they go for a third consecutive trip to the state finals.

The two teams are tentatively scheduled to play their semifinals matches at Sugar Creek Tennis Club on Tuesday, April 30 with a time to be announced.

Class 6A
The Dunwoody Wildcats advanced to the Class 6A boys’ Final Four with a 3-0 road victory over Lakeside-Evans on Thursday afternoon.

Sophomore Quinn Wicklund improved to 15-1 on the season as he took the No. 3 singles match 6-0, 6-0 in leading the Wildcats to the win.

The Wildcats (12-8) move on to a match at Region 7-6A rival Northview in the semifinals. Dunwoody has dropped a pair of matches to Northview this season 3-2 and 3-1.

The Tucker Lady Tigers season came to an end with a 3-0 loss on the road at Cambridge on Thursday.