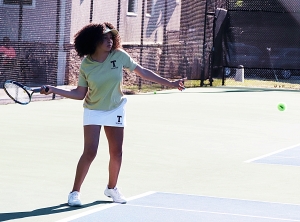 Tucker’s Trinyty Turner rallied from one set down to clinch a 3-2 Tucker win over Greenbrier in the Class 6A girls’ state playoffs. (Photo by Mark Brock)

A thrilling, three-set, match-deciding victory by Trinyty Turner propelled the Tucker Lady Tigers to a 3-2 victory over Greenbrier at Sugar Creek Tennis Center and into the Class 6A Girls’ Elite Eight for the second consecutive year.

Greenbrier swept both the No. 1 doubles and No. 2 doubles 6-0, 6-0 to take a commanding 2-0 lead in the match and putting Tucker in a big hole with three singles matches left to play.

That left the match in the hands of Turner and her Greenbrier opponent Amber Lyons. Lyons had rallied from an early 2-0 deficit in the first set to take a 1-0 lead in the best-of-three match with a 6-4 win.

Turner responded with a 6-1 victory in the second set to knot the match at 1-1 with the momentum swinging win. Turner was leading 3-2 in the deciding third set when she reeled off three games in a row to clinch the set and match 6-2. Turner improved to 14-2 on the season with the win.

Tucker is now 15-2 on the season and advances to face a tough Cambridge squad in the quarterfinals. Cambridge, which defeated Winder-Barrow 5-0, will host the match at a date and time to be announced. 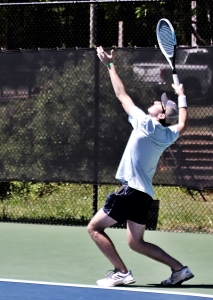 The Chamblee Bulldogs improved to 16-5 on the season by cruising to a 3-0 win over North Springs on Monday at Chamblee to move into the Class 5A Boy’s Elite Eight for a second consecutive season.

The No. 1 doubles team of senior Carter DiFonzo and freshman Bryce Starks improved to 7-1 on the year with a 6-2, 6-3 victory.

Chamblee moves on to the quarterfinals for a rematch with McIntosh, a 5-0 winner over Harris County. The two teams met in the same round last year with McIntosh coming out the victor.

The Druid Hills Red Devils had their season come to an end with a 5-0 loss to West Laurens in the Class 4A second round on Monday.