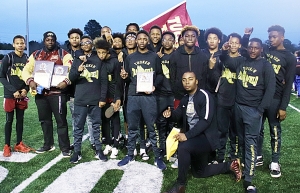 A second consecutive DeKalb County Middle School Track Championship title went to the Tucker Tigers by a 30-point margin of 102-72 over Bethune on Monday at Godfrey Stadium.

The Tigers trailed Bethune 22-13 coming off Saturday’s field events and 1600m run, but a 1-2 finish in the 1600m sprint medley relay to open Monday’s track finals quickly turned things in favor of the defending champions. Tucker won the even with a time of 4:01.05 and took second edging out Bethune by just four thousandths of second to take the lead for good at 31-28.

Most Valuable Runner Xavier Taylor played a key role down the stretch with a win in the 400m dash (55.08) just before Jayquan Billingsley (11.51) held off teammate Ethan Sanders-Brown and Salem’s Ashton Moore for the win over the pair who crossed the finish line even in 11.77.

Bethune had no runners in either the 400 or 100 and Tucker’s lead expanded to 76-45 with just three events remaining to all but clinch the title for the second consecutive season. 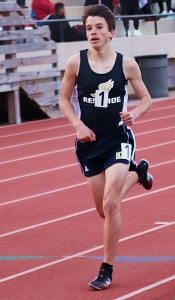 Cedar Grove’s Barry Jackson won the long jump with his leap of 19-02.00. The shot put title went to Bethune’s Demarious Marshal with his toss of 44-00.00 in Saturday’s competition.

The championship was Tucker’s fourth in six seasons under the guidance of Coach of the Year Jermaine Walker. Walker’s squads won back-to-back titles in 2014 and 2015 while coming in as the runner-up in 2016 and 2017.

See link below for full results of the 2019 DCSD Middle School Track Championships: