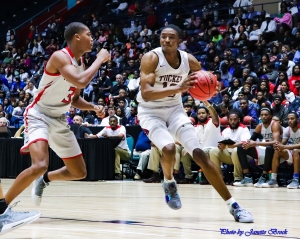 The Tucker Tigers fought hard all afternoon before falling 46-43 to the Tri-Cities Bulldogs on a last second three-pointer by Da’Marcus Johnson in the Class 6A boys’ state championship game at the Macon Centreplex on Saturday.

Following two free throws by Tucker’s Nick Watson to tie the game at 43-43 with just 6.9 seconds to play, the Bulldogs got the ball up the court with Johnson in control well outside the top of the key.

Johnson stepped back and drilled the game winning shot from about 25 feet to break the hearts of the Tucker faithful who had traveled to Macon to cheer on their Tigers.

Raylon Barrion had given Tucker the lead at 16-14 on a drive to the basket with 4:26 to play in the first half. David Giddens played a big part in the Tigers regaining the lead and going into the half up 22-18 with eight points in the quarter, including three put-back baskets.

But a fourth quarter drought from the field in which the Tigers scores just six points on 6 of 9 from the free-throw line proved costly. 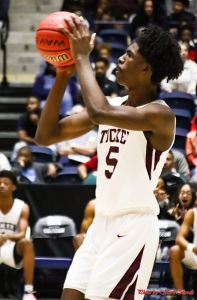 Tucker’s David Giddens shoots a free throw during second half play in another Class 6A boys’ championship thriller against Tri-Cities. (Photo by Mark Brock)

The Tigers committed one of just three second half turnovers (all in the fourth quarter) and Demetrius Rives drove and lofted a shot off the glass to give the Bulldogs a 43-41 advantage with just 19 seconds to play.

Watson got the ball and drove the baseline and was fouled to set up his game-tying free throws with 6.9 seconds to play.

Tucker’s defense held Tri-Cities 33.8 points below its playoff average of 79.8 and the 46 points was the lowest output of the season for the Bulldogs.

Jermontae Hill scored a game-high 14 points despite picking up his fifth foul with 4:35 to play in the game. Giddens added nine points and nine rebounds for the Tigers who finish the season as the state runners-up at 28-5.

Johnson led Tri-Cities with 13 points (8 in the fourth quarter) as Peyton Daniels added 12 points (4 three-pointers) and Titus Hunter added 11. The Bulldogs completed their season at 26-6.