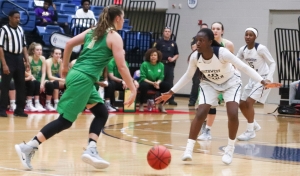 Seventeen second half turnovers proved too much to overcome for the No. 5 ranked Southwest DeKalb Lady Panthers as they fall in 51-38 to No. 1 Buford in the Class 5A girls’ high school basketball semifinals at Columbus State on Saturday.

Leading 26-24 with 6:00 left in the third quarter Buford used a pair of Southwest turnovers and an offensive rebound into an eight-point run to take control on the way to a 35-28 lead with a quarter to play.

Adrieanna Brownlee’s basket to start the fourth cut the lead to 35-30, but turnovers again reared their head again and Buford got a basket by Tate Walters and a free throw from Sara Viti to push the lead out to 38-30.

Buford would hit the last 12 points from the free throw line as turnovers turned into fouls late.

Aniyah Lee had a late three-pointer and Kimbrough rebounded for another basket late as Buford continued to keep Southwest at bay with free throws.

Brownlee finished with 13 points to lead the Lady Panthers who wrap up their season at 24-7. Walters hit for 20 to lead Buford.