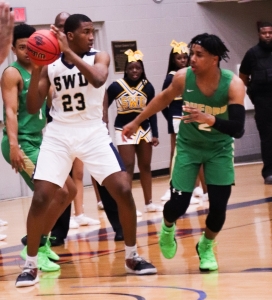 The No. 3 ranked Southwest DeKalb Panthers fell behind 14-6 and could never rally closer than five the rest of the way in falling 58-50 to the No. 1 ranked Buford Wolves in the Class 5A boys’ high school basketball semifinals at Columbus State on Saturday.

Donell Dixon hit six three-pointers in the game including two in the first quarter the second of which made it 14-6 heading into the second quarter.

Wytavis Searcy got a nice pass from KD Johnson for a layup to cut the lead to 21-16 with 4:35 to play in the first half, Dixon answered with a three-pointer and Buford would go on an 8-1 run to end the half to take a 29-19 lead into the break.

Dixon would hit for three more treys in the third quarter as the lead extended to 44-33 heading into the 4th quarter.

James Glisson had six points in the third quarter, but the Panthers could not close the gap.

Buford scored baskets by Eric Coleman and Caleb Williams in less than a minute to start the fourth quarter as the lead jumped to 15 (48-33) with 6:58 to play.

Five points from Johnson and an offensive put backs by Glisson and Jarrett Walton brought the deficit down to eight (50-42) with 4:39 to play.

Buford got a big momentum breaking three-pointer from Coleman from the left corner.

Southwest DeKalb got a free throw from Johnson and two more from Glisson to trim the lead to 53-45 with 1:44, but the Wolves would hit six consecutive shots from the free-throw line to seal the win.

Johnson added two offensive put backs in the final 21 seconds to make the final of 58-50.

Johnson finished with 17 points and Glisson added 12 in the loss as the Panthers finish the season 24-7. Dixon led Buford with 20 in the game.