No. 2 Villa Rica Holds Off Columbia for 57-50 Class 5A Semifinal Win 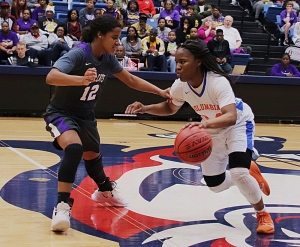 The No. 2 ranked Villa Rica Wildcats needed some late free throws to hold off the Columbia Lady Eagles for a 57-50 victory in the Class 5A girls’ high school basketball state semifinals on Saturday at Columbus State.

Villa Rica’s Deasia Merrill hit six of eight free throws after Columbia closed the game within 51-50 with 53 seconds to play.

Columbia trailed 45-37 after Aliyah Hindsman’s layup with 6:45 to play in the game when the Lady Eagles began to rally against the highly touted Lady Wildcats.

India Terrell drove for a layup and after a Villa Rica turnover Shontrice Austin save a rebound into the lane to teammate Constance Thomas for a layup and it was quickly 45-41 with 4:49 to play.

Austin drove to the basket to cut the lead to 47-43 and Terrell follow with a steal and layup cut the advantage to 47-45 with 2:46 remaining.

Daija Carr hit a three-pointer with 2:18 to play to trim the lead back down to 49-48 and force a Villa Rica timeout.

Out of the timeout the Lady Wildcats went inside to Merrill who put the ball in the basket for a 51-48 advantage. Terrell answered on the other end with a drive to make it 51-50 with 53 seconds to play.

Merrell hit two of four to make it 53-50 with 29.6 seconds to play in the game and the Lady Eagles needed a three to tie.

Carr got a good look on the other end with 15 seconds to play, but the shot rimmed out and Merrill got the rebound and was fouled with 13.9 seconds to play.

Merrill would hit four straight from the free-throw line to seal the win for Villa Rica (32-0). Columbia ends the season 22-8.

Merreill finished the night with 26 points and 19 rebounds to lead Villa Rica.