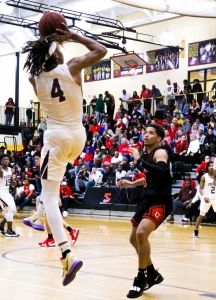 Tucker’s Jermontae Hill (4) goes up for two of his 29 points against Gainesville in the Tucker’s 65-58 Class 6A Elite 8 win on Wednesday night. (Photo by Mark Brock)

The Tucker Tigers joined the DeKalb Rally Team with a come-from-behind 65-58 Class 6A Boys’ State Tournament Elite Eight win at home against the Gainesville Red Elephants on Tuesday night.

Reminiscent of second half rallies by the Southwest DeKalb Panthers (18 points) and the Columbia Lady Eagles (8 points) Tucker clawed its way into the lead behind a 23-point second half performance by Jermontae Hill. Tucker joined those two along with the Southwest DeKalb Lady Panthers and Lithonia Bulldogs in the Final Four of the state high school basketball playoffs.

Hill showed what was to come in the second half as his dunk tied the game briefly at 33-33 only to see the Red Elephants (21-9) build the eight-point lead behind a three-pointer by Eli Pitts and a basket in the lane by Julio Santana at the 1:25 mark.

Hill who had already scored eight of Tucker’s nine points in the second half sandwiched Gainesville’s Brent Kelly’s basket with a three-point play and a three-pointer just before the end of the third quarter to close the gap to 50-46. Hill had 14 points in the third period alone as he carried his team into the fourth quarter with the momentum edge.

Makias Scott hit a layup just 14 seconds into the fourth quarter to give Gainesville a 52-46 lead. Hill went back to work scoring the next six points, the last two about eight feet along the baseline to tie the game at 52-52 with 6:21 to play.

Dee Buffington gave Gainesville the lead back on two trips down the floor with a basket and then 1-2 from the free-throw to make it 55-52 with just 4:53 remaining in the game.

A pair of free throws from Tucker’s Raylon Barrion followed by Barrion’s drive for a layup gave the Tigers their first lead since 29-28 with just over two minutes left in the first half at 57-55.

Two turnovers later Gainesville regained the lead at 58-57 at the 2:23 mark on a free throw by Raphael Rubel.

Barrion put Tucker ahead to stay with another twisting drive for a layup to make it 59-58 with just under two minutes to play and a Final Four berth on the line.

Gainesville had the opportunity to tie or take the lead, but missed four consecutive free throws and finished 2-10 in the fourth quarter from the line.

Jaquan Rush made a big play following the second set of misses by scrambling for a loose ball on the floor and getting a timeout to give the Tigers the ball with the 59-58 lead with just one minute left in the game. 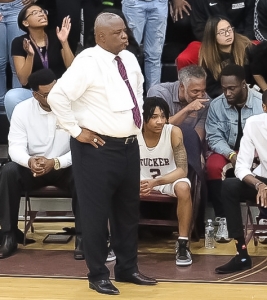 Nick Watson hit two of four free throws to make it 61-58 with 56 seconds to play.

Following a Gainesville miss, Hill was fouled and calmly hit two free throws to make it a two-score game at 63-58 with 18.9 seconds remaining.

Braylon Seals would further clinch the Tigers’ win with two more free throws with 4.4 ticks left on the clock as the tigers knocked down 9-14 from the line in the fourth quarter.

Hill finished with a game high 29 points to lead the Tigers in the win, 23 of them in the big second half rally. Raylon Barrion added 15 points and Nick Watson put in 8 points and grabbed 7 rebounds.

Maurice Hector had 14 points, all in the first half, to lead Gainesville and Raphael Rubel added 10.

Tucker advances to the 8:00 pm Class 6A boys’ semifinal at West Georgia on Saturday against Heritage of Conyers (17-12) in the Tigers first Final Four appearance since a 74-64 loss to Wheeler in 2013. Tucker Head Coach James Hartry is one win away from his 380th (379-175) career victory in 19 years at the helm of the Tiger program. He won his 375th during the Region 4-6A Tournament.