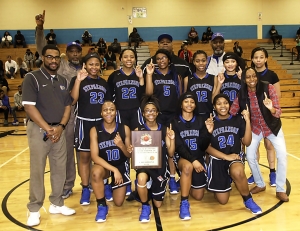 Stephenson jumped out to a 22-6 halftime lead and kept the Lakeside Lady Vikings in the rearview mirror on the way to a 43-23 victory to claim the title.

Trinity Coleman had four points in the first quarter for Stephenson (11-2) and Jirah Snelling had three as the Lady Jaguars held Lakeside (10-3) to just four points in the quarter to go up 10-4. Jemia Johnson and Ella Steed scored a basket each for the Lady Vikings in the opening quarter.

Lakeside managed just two free throws in the second quarter as Stephenson stretched the lead to 22-6. Snelling hit a three-pointer and Coleman added a basket and a 1-2 outing at the free-throw line for Stephenson. Zoey McMickens, Gabby Taylor and Micah Neal also had baskets in the quarter for Stephenson.

Marileysis Wade had three points as Lakeside doubled their output in the first half with eight points in the third quarter playing Stephenson almost to a draw in the quarter. The Lady Jaguars scored nine points led by Faith Watkins with five.

Johnson hit a pair of three-pointers in the fourth quarter for Lakeside, but the balanced attack by Stephenson led by Snelling with four points kept the Lady Vikings at a distance.

Snelling collected MVP honors with her 12 point performance for Stephenson. Coleman finished with 9 and Watkins with 8.

Lakeside was led by Johnson with eight points with Steed and Wade contributing five points each. 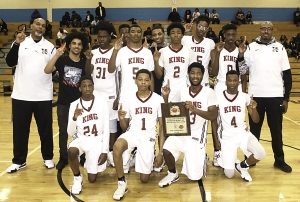 Both teams entered the game having battled their way from being region runners-up during the regular season.

Following a slow first quarter by both teams that had the Lions (10-3) leading by a 6-2 margin, both teams heated up some in the second period with the Lions taking a 17-10 lead into the half.

Martweze Grier, game MVP, hit for five points, including a big three-pointer, and Sterling tacked on four to aid the Lions’ cause. T. Smith and K. Hayes both had three points for the Tigers (8-5).

Sterling hit for six in the third quarter as the two teams four the going tough from the field as the Lions held the lead up 25-16. Smith, Hayes and J. Calloway each had a basket for the Tigers.

Sterling’s 17-point performance led all scorers in the game and Grier added 8 for the Lions. Smith was the only Tiger in double figures as he hit for 10 in the game.