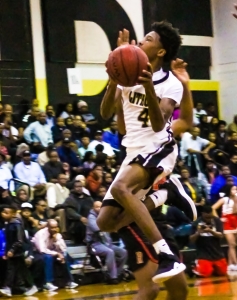 Lithonia’s Eric Gaines (4) drives for two of his 27 points in the Bulldogs 67-54 win over the Rome Wolves. (Photo by Mark Brock)

A second half shootout between Lithonia’s Eric Gaines and Rome’s Caleb Byrd ended up with the homestanding Bulldogs holding off the Wolves 67-54 to advance to the Elite 8.

Byrd scored 22 second half points as he was trying to will his team back into the game after Lithonia (20-9) went up 42-21 on a drive by Brison Rockcliffe with 4:39 to play in the third quarter.

He rounded out the quarter with 35 seconds to play by nailing a long three-pointer to close the gap to 14 (46-32) heading into the final quarter of action.

Gaines who had six points of his own in the third quarter took over most of the scoring chores for Lithonia in the fourth quarter. His two free throws with 4:34 to play put the lead back at double figures at 51-40.

Byrd countered with four free throws and the lead was down to eight at 52-44 with 3:41 remaining.

Gaines got a steal and took off down the court and leaped from just inside the free-throw line to slam home a one-handed dunk that brought the crowd to their feet and turned the momentum back in favor of the home team with 3:29 to play.

He would sandwich a 1-2 outing at the line by Broderick Jones with four free throws of his own to extend the lead to 59-46 with 1:44 left in the game. A Rockcliffe drive for a layup and two more free throws by Jones upped the lead to 63-48 at the 55 second mark.

Jones rebounded a miss underneath for a put back with 38 seconds to play for a 65-48 lead just 14 seconds later.

Gaines hit two more free throws to finish 9-10 in the quarter to make it 67-49. Byrd would hit a three-pointer and Brown added a dunk just before the buzzer for the final of 67-54.

Lithonia had fallen behind 4-0 early in the first quarter, but scored 19 consecutive points to go u 19-4 early in the second period. The Bulldogs would hold a 29-17 lead at the half behind a 12-point, 8-rebound performance by Justin Myles.

Eric Gaines finished with 27 points to lead Lithonia followed by Myles with 19 points and 15 rebounds and Brison Rockcliffe with 12 points.

The No. 7 ranked Bulldogs now must go on the road to defending state champion and No. 8 ranked Warner Robins (23-6) next week in a rematch of Warner Robins’ Elite 8 win with the chance to advance to the Final Four at Columbus State. A day and time will be announced at a later time. Lithonia is advancing to the Elite 8 for the fifth consecutive season. 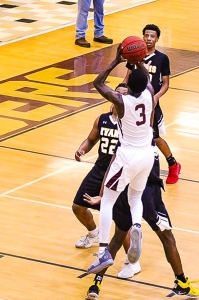 Tucker’s Braylen Seals shoots the game winner with 7 seconds to play to lift the Tigers to a 65-63 double overtime win against the Evans Knights. (Photo by Lester Wright)

Class 6A Boys
Tucker 65, Evans 63
It took two overtimes, but the Tucker Tigers pulled out a heart-thumping 65-63 victory over Evans at Tucker on Thursday night.

The Tigers (26-4) held small leads throughout the first half including a 24-20 advantage at the half.

Evans (24-5) defense limited Tucker to just five points in the third quarter and the Knights headed into the fourth quarter leading 34-29.

Tucker rallied to tie the game at 43-all to send the game into the first overtime which ended knotted at 54-54.

After tying the at 63-63, Tucker got the ball back and called timeout with 30 seconds to play in the game. The tigers came out of the timeout and ran the clock down and junior Braylen Seals got the ball at the right elbow got into the paint and elevated above the Evans defender and swished a shot from about 13 feet with seven seconds to play.

Evans got the ball in and down the court, but could not get a shot off before the horn sounded ending the game to send Tucker into the Elite 8 for the first time since the 2015 trip to the state semifinals. Tucker had lost three consecutive first round games the past three seasons.

Nick Watson led the way for Tucker with 18 points followed by Jermontrae Hill with 15 and Brandon Seals 11 including the big game winner.

The No. 5 ranked Tigers will host the Gainesville Red Elephants (21-8) at 7:00 pm on Wednesday. Gainesville advanced with a double overtime win of its own taking down No. 8 ranked Cambridge 98-88.