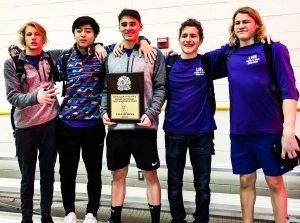 Chamblee’s six-year reign (2013-2018) as the DCSD Boys’ Swimming and Diving champions came an end as the Lakeside Vikings captured the 2019 title at Chamblee last Saturday.

Senior Sam Witcher got the Vikings off and running in the meet as he won the one-meter diving event for the fourth consecutive year and set the point total record for the third consecutive season with 591.90 break his mark of 545.65 set a year ago. 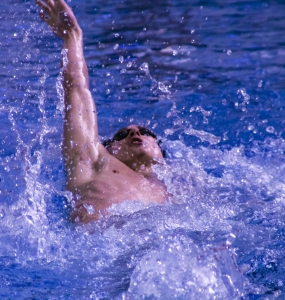 Druid Hills Liam Bell set three records and became a six-time individual champion. He used this backstroke on the way to the 200 individual medley record. (Photo by Mark Brock)

Chamblee had won six consecutive seasons and the 200-freestyle relay (1:29.75), both state qualifying times won the past five years by Chamblee.

The Wildcats also picked up five gold medals and collected nine Top 3 finishes to collect the runner-up slot ahead of Chamblee.

Nicholas Bragg followed with the gold in the 100 butterfly with a time of 55.19 and the Dunwoody 400 freestyle relay team swam to a time of 3:19.06 to break Chamblee’s five-year hold on the relay title.