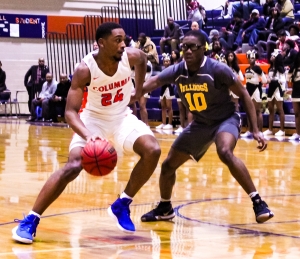 Columbia’s Delvin Longstreet (24) and Lithonia’s Brison Rockcliffe (10) battled all night long with Longstreet’s Eagles pulling out a 59-58 overtime thriller over the No. 4 ranked Bulldogs. (Photo by Mark Brock)

Columbia’s Hall of Fame boys’ basketball coach Phil McCrary picked up win No. 597 as his Eagles knocked off the No. 4 ranked Lithonia Bulldogs 59-58 in an exciting Region 5-5A overtime game at Columbia on Tuesday night.

Trailing 58-57 after Lithonia’s Brison Rockcliffe hit one of two free throws with 24.8 seconds to play, the Eagles threw the ball in against full-court pressure and LJ Thomas found teammate Josh Smith wide open behind the defense for an easy layup and a 59-58 lead with just 16 seconds to play.

The Bulldogs (14-8) got the ball up the court and called a timeout to set up a final shot. Rockcliffe drove in, but his shot came off the rim into the hands of Delvin Longstreet who dribbled the final 4 seconds off the clock to preserve the big win for the Eagles (11-7).

D’Kwon Hass hit two free throws at the 1:07 mark, but N’Kyzie Hawkins’ got free for a three-pointer with 26 seconds left to cut the lead to 8 (37-45) heading into the fourth quarter.

After Thomas put the Eagles up 47-37 on a jumper with 7:47 to play in the game, Demetrius Collins and Hawkins both hit a three-pointer to key an 11-0 run by Lithonia. Rockcliffe hit a layup and Justin Myles knocked one of two from the free-throw line with 3:43 to play to give Lithonia its first lead since 7-5 halfway through the first quarter.

The lead would change hands five times in the next 3:09 of the game with Columbia going back up 53-52 on Longstreet’s bank off the glass with 34 seconds to play.

Lithonia ran the clock down to 18 seconds and called a timeout. A foul with 6.4 seconds to play sent Rockcliffe to the line where he hit the second of two free throws to time the game at 53-53.

Columbia failed to get a shot off and the game went into the overtime.

Back-to-back turnovers by the Eagles, who had 13 in the second half and overtime after just turning the ball over 6 times in the first half on the way to a 30-14 lead, led to a three-pointer by Zephaniah Corker to tie the game at 57-57 with 1:01 to play

Lithonia got the second turnover led to Rockcliffe’s free throws. The second one was rebounded by Hass and pass up the floor to Thomas who found Smith for the game-winner.

Delvin Longstreet hit for a game-high 23 points, Thomas added 14 points and Hass finished with 12 points and 9 rebounds to lead the Eagles.

Justin Myles put together a 19-point, 11 rebound double-double to lead the Bulldogs and Rockcliffe finished with 17 points.

Columbia improved to 5-4 and moved into third place in Region 5-5A play with three region games left on the season. Lithonia fell into second place at 8-2 as No. 5 Southwest DeKalb (17-6, 9-1) pulled out a tough 54-52 win over Chamblee to take over the top spot.

McCrary is just three wins away from a historic 600th win as he improved to 597-210 in 28 years heading up the Columbia program from 1987-2012 and 2016-2018. He moved into the DeKalb County Athletics Office from 2012-2015 as an Athletics Coordinator before returning to the sidelines after retiring. He won five state titles during his first 25 years at Columbia. 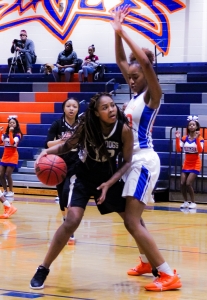 Lithonia’s Zaryanna Mitchell (12) looks for room to score against Columbia defender A. Maddox. Columbia won the Region 5-5A contest 69-22. (Photo by Mark Brock)

(G) Columbia 69, Lithonia 22
The surging Columbia Lady Eagles ran off 12 unanswered points to open the game against the Lithonia Lady Bulldogs and cruised to a 69-22 Region 5-5A girls’ win at home.

India Terrell hit the first six points of the game for Columbia and eight of the 12 in the opening run with Daija Carr and Constance Thomas each adding a basket.

Lithonia’s Zaryanna Mitchell broke the Columbia run with 4:12 to play in the first quarter with an offensive put-back.

Thomas would hit for six more and Carr another bucket as the lead went to 20-4.

Lithonia’s Jai-Jah Porter made it a 20-7 game with a three-pointer with 33 seconds left in the first quarter.

The Lady Eagles took a 41-15 lead into the half by outscoring Lithonia 21-8 in the second period. Terrell added six more for 14 first half points to go with four more from Thomas and four from 1,000-point club member Shontrice Austin.

Thomas, who finished with a game high 22 points and grabbed eight rebounds, hit for six points in the third period and Carr connected for four more as the lead went to 57-22.

Terrell finished with 16 points with Daija Carr adding 14 for Columbia.

Diamond Jones had 7 points and 10 rebounds to lead Lithonia while Zaryanna Mitchell also scored 7 in the game.