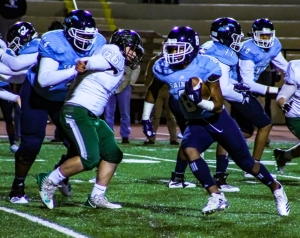 Robert “Pop” Jones scored three touchdowns to lead the No. 2 Cedar Grove Saints into the Class 3A quarterfinals for the fourth consecutive season with a 49-33 victory over the North Hall Trojans on Friday night at William “Buck” Godfrey Stadium.

The Saints got out to a quick 13-0 lead thanks in part to three fumbles forced against the North Hall offense. The first came on the opening drive of the game with Dante Walker recovering at the North Hall 16.

It took just one play for the Saints to capitalize as Jones went off left tackle, cut up the middle and bowled over a pair of would be tacklers at the goal line for the touchdown with just 56 seconds gone in the game. Luis Dominguez hit the PAT to make it 7-0.

Cedar Grove could not take advantage of the second North Hall fumble as the Trojans were able to force a turnover on downs, but one play later the Saints recovered a third fumble at the Trojan two-yard line. Kendall Boney kept up the middle for the score. The PAT was no good for a 13-0 lead with 7:55 to play in the first quarter.

A 44-yard interception return by Daniel Jackson set the Trojans up at the Cedar Grove 26, but the Saints forced a 22-yard field goal by Erin Sanchez with 11:50 left in the first half as the lead fell to 10 (13-3). 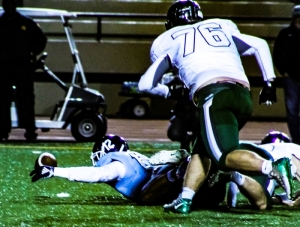 Cedar Grove answered right back marching 69 yards in seven plays on all the ground to take a 19-3 lead with 9:05 left in the half. Runs of 19 yards by Chavon Wright, 16 by Jones and 21 by Austin Smith moved the Saints to the Trojan three-yard line. Jones finished off the drive by bulling his way into the end zone. A two-point conversion try came up short.

Rashod Dubinion’s 36-yard punt return to the North Hall 26 set up a two-play scoring drive by the Saints. Jones carried 25 yards to the Trojan 1 and Smith pushed his way into the end zone on a keeper around the left end for the touchdown with 7:28 to play in the half. Smith then hit Montre Montfort for the two-point conversion pass for a 27-3 Saints’ lead.

Dubinion would set up his own touchdown run with a 33-yard pin ball like run down the middle of the field bouncing off tacklers down to the North Hall four-yard line. He would go the final four yards on the next play for the touchdown. Jones ran in the two-point conversion to make it a 35-3 advantage at the half.

The Saints defense had held North Hall’s prolific rushing attack to just 24 yards in the first half and kept the Trojans inside their own 35 on six of eight drives and their only venture past the 50 was on the interception that resulted in the field goal. 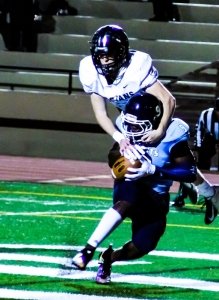 Cedar Grove’s Montre Montfort hangs on to a pass for a two-point conversion with a North Hall defender on his back. (Photo by Mark Brock)

Cedar Grove made it a 42-3 game with 5:52 to play in the third quarter as Smith hit Jones on a swing pass that Jones took 24 yards to the house. Dominguez added the PAT.

A lot of young Saints got playing time from that point on both sides of the ball and North Hall which had just 29 yards of offense up to that point was able to take advantage.

Daniel Jackson got loose down the right sideline for a 70-yard touchdown and the Trojans try for two was good to cut the lead to 42-11 with 5:29 left in the third quarter.

Drew Faulkner’s two-yard run for a touchdown with 11:54 remaining cut the lead to 42-17 before Mekhi Gilstrap, who had 99 yards rushing on eight carries all in the second half, got away for 38 yards and a touchdown with 9:38 to play. Dominguez’s PAT made it a 49-17 game.

A Cedar Grove fumbled led to another North Hall score as the Trojans recovered on the Saints’ 26 and Faulkner finished the short drive with a 12-yard run with 6:12 to play. The two-point conversion pass was good to make it 49-25 game.

North Hall recovered an onside kick after the score and JT Fair finished a 52-yard drive with a touchdown run of 11 yards with 1:10 to play. Another two-point conversion was good to make the final of 49-33.

The Saints (11-1) must travel to Savannah next Friday night to take on No. 5 ranked Benedictine (11-1) which needed aa red zone stop against Westside-Macon to hold on for a 43-36 win.