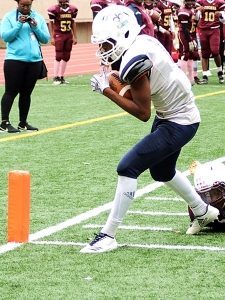 Cedar Grove All-Star Alvin Houston with a touchdown catch in the Trail to the Title semifinals. (Photo by Mark Brock)

Bethune Head Coach Henry Garrett leads the DCSD All-Stars after capturing the school’s first Trail to the Title Championship 33-6 over Tucker in a rematch of their 2017 loss to the Tigers. 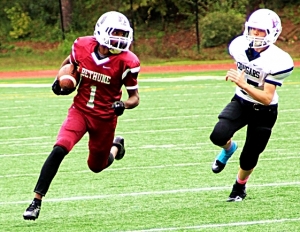 Bethune All-Star Bernard Mack (1) retuned a punt 47 yards for a touchdown in the Trail to the Title semifinals. (Photo by Mark Brock)

DCSD won the inaugural game in 2016 18-0 at Hallford Stadium by holding APS to just 52 yards of total offense, including 10 negative yardage plays, led by game MVP Khoreem Miller of Chapel Hill. Miller was in the APS backfield for much of the game disrupting plays from his defensive tackle position.

Lithonia’s Narvin Booker was named the Offensive MVP with 72 yards rushing in the game. Tucker’s Keeman Hayes had a two-yard touchdown run in the third quarter to break a scoreless tie and Stephenson’s Kamar Wilcoxson returned a punt 85 yards to make it 12-0 with 5:34 to play. Champion’s Jordan Grier sealed the win with a 38-yard touchdown run with 1:28 to play.

Bunche’s Deontre Morris was named the Defensive MVP for his gritty performance for APS.

APS hosted the 2017 game at Lakewood with the two squads battling in a scoreless tie before a late field goal by Tucker kicker Maddox Lyerla gave DCSD a 3-0 victory.